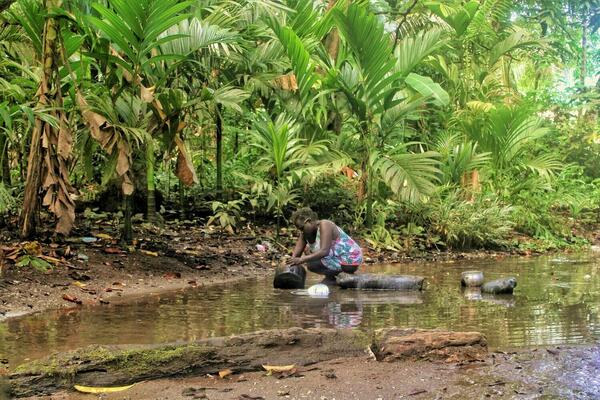 “When there is heavy rainfall it affects the water. Also when it's dry, it will also affect the water”, Jinalyn says.
Source: Jeremy Gwao
By Jeremy Gwao
Share
Wednesday, 26 August 2020 08:48 AM

Proper coverage and access to clean water supply is lacking in rural areas in the Solomon Islands.

Leona village in Vella la Vella, in the Western province is a classic example of the typical challenges faced by rural villages in the Solomon Islands.

A stream that runs past the village is the only source of water for the people there.

“After the tsunami, our water supply was damaged. So we now rely on the stream for drinking, cooking, and to wash dirty utensils”, Jinalyn Nonita says.

Jinalyn comes from this village in Vella. She says in the past, they had pipes that were connected to the stream.

But now she says things have changed and the issue of water is more challenging.

“When there is heavy rainfall it affects the water. Also when it's dry, it will also affect the water”, Jinalyn says.

She says they have water tanks that are shared between the people in the community.

“Sometimes when there is no water, we have to climb up the hills to find other water sources”.

Jinalyn says it is tiring for them to fetch water on a daily basis.

"So at times we share tanks with those who have tanks if we are faced with bad weather," she adds.

Leona village has a lot of streams surrounding the community, but only one stream is used most often - this has led to sickness for some.

"Diarrhea is the main sickness experience here since we do not access proper water and sanitation facilities”, she says.

The stream is used by more than 700 people in the village.

Despite receiving a lot of support in the water and sanitation area, communities in rural areas continue to face issues such as this.

In its National Development Strategy (NDS) 2016 - 2035, the government has established targets to achieve water and sanitation for all Solomon Islanders.

The NDS is said to be in line with the United Nations Sustainable Development Goals (SDGs). SDG 6 seeks to achieve universal and equitable access to safe and affordable drinking water for all by 2030.

It was only this month, the European Union released the final payment of EUR 6,450,000 (nearly SBD 60,000,000) to the Government of Solomon Islands as part of its partnership signed with the Government in 2014 to improve access to water and sanitation in rural areas, under the European Development Fund (10th EDF).

The EU has been supporting the efforts of the Ministry of Health and Medical Services to provide safe drinking water and promoting sanitation and hygiene in rural areas.

The release of these funds are said to be timely as it will allow work to be done to continue providing access to safe, sufficient and affordable water, sanitation and hygiene facilities that are essential to protect the population from several diseases, including COVID-19.

Under the 10th and 11th EDF, the Government of Solomon Islands and the EU have been working together to improve living conditions of the rural areas through better community infrastructures and services, including water and sanitation.

The EU will continue to accompany the efforts of national and provincial governments to bettering quality and availability of essential services with new projects.