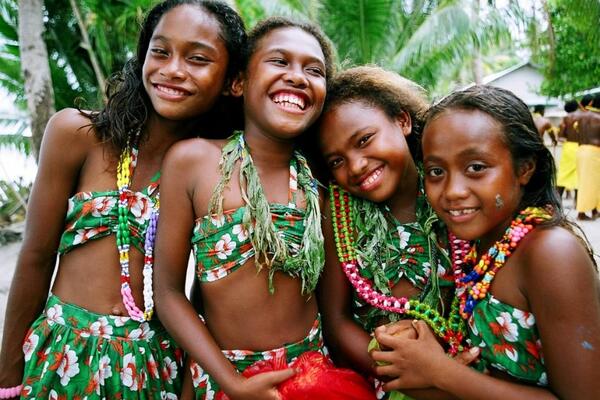 Children on the Takuu group of atolls, also known as the Mortlock Islands.
Source: ABC
Share
Friday, 10 September 2021 09:30 AM

New research on the origins of the Hawaiian language is stirring debate over the long-held theory in Polynesian migration that the islands were settled from Samoa.

New linguistics research by UH Hilo Hawaiian Language Professor William "Pila" Wilson suggests the original settlers of the Hawaiian Islands came not from Samoa but from small, low-lying atolls just outside of Papua New Guinea (PNG) near the Solomon Islands.

The Takuu group of Atolls, also known as the Mortlock Islands, lies north-east of Bougainville in PNG, just outside of the Polynesian Triangle. Today, only around 300 people remain on Takuu Atoll.

A Big Island Hawaiian language professor uncovered linguistic evidence for a new theory – that Hawai'i's first inhabitants may have migrated from a small chain of coral atolls closer to Hawai'i.

Conventional understanding of Polynesian migration to Hawai'i is that the islands were settled from Samoa by way of the Marquesas Islands.

For some 50 years, conventional understanding of Polynesian migration to Hawai'i was that the islands were settled from Samoa by way of the Marquesas more than 2,000 miles south of here. But UH Hilo Linguistics Professor William "Pila" Wilson says his research reveals a new theory.

Wilson first proposed this theory in 1985, but there were doubts that atolls could be sources of major populations. UH Manoa linguistics professor and Austronesian language expert Bob Blust admits he only recently came to accept Wilson's theory after examining the evidence.

Wilson’s latest research identifies more than 200 linguistic changes that are shared exclusively by these Polynesian outlier islands and East Polynesia, but not Samoa.

“The great thing about it is that some of the crucial islands which are important here these Polynesian outliers, no archeology has been done there,” says Spriggs, “So every keen young archaeologist I've been meeting, I've been telling them to get over to some of these outliers.”

And Wilson says time is of the essence. Rising sea levels could force the inhabitants of these low-lying atolls to flee their homeland, and in the process, risk losing the ancestral language of all of East Polynesia.