A Traditional Comb from Kwaio Sold For SBD$10,000 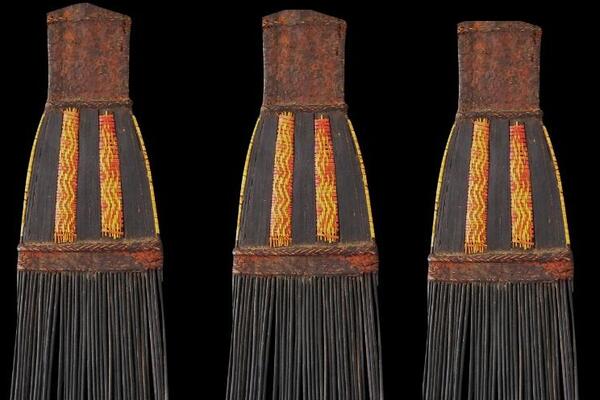 The rare arts collection industry is worth billions of dollars, yet the rarity of the art is tied to the history of a people hundreds of miles away from the collector’s arts studio.
Source: File
By Samson Sade
Share
Wednesday, 21 September 2022 14:16 PM

The art and culture of the Solomon Islands is diverse and unique. It is also prized by collectors around the World.

Solomon Islands art is often classified under World Art by collectors, which is a generic term used for rare antiques and colonial decorative arts.

The Kwaio people of Malaita developed a unique form of comb, used hundreds of years before the islands were discovered by Western explorers.

The traditional comb, known locally as “hahao” is made from yellow orchid fibres and coconut palm fibres which is dyed red with a root called “geru.”

A recent auction by a rare arts collector in London saw the traditional comb being sold for close to SBD$10,000. That is the value outsiders place in rare traditional arts – but rarely will that money make it into the hands of those that could be considered the rightful custodians – in this case the people of Kwaio.

The rare arts collection industry is worth billions of dollars, yet the rarity of the art is tied to the history of a people hundreds of miles away from the collector’s arts studio.

French President Emmanuel Macron has championed the return of rare arts stating recently: “I cannot accept that a large part of the cultural heritage of several African countries is in France. There are historical explanations for this, but there is no valid, lasting and unconditional justification for it.”

For Solomon Islands the issue may not be about restitution, since most of the arts that make it to collectors’ galleries are not stolen or looted, as is the case for continental Africa. The issue for Solomon Islands is placing value in our traditional arts, and finding ways for the people that are the rightful custodians of such unique art to benefit from it.

Partnership between world renowned galleries and the government is one possibility, but this is often fraught with inefficiencies, and may not work for such galleries. With so much talk about helping rural communities, one aspect that is rarely talked about is the arts. The arts should be added to government’s long list of ‘potential’ and serious thought put into developing it.