A Tale of Perseverance and Struggle 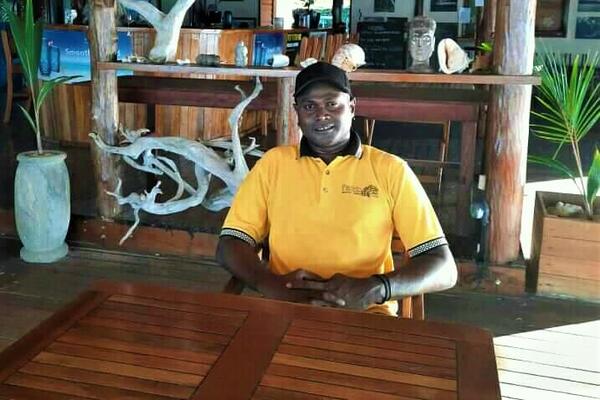 Manoj Dhari grew up in Gizo where he also went to Gizo community high school. He left school in the 1990s at just form three.
Source: Supplied
By Jeremy Gwao
Share
Wednesday, 12 August 2020 09:09 AM

Finding a job in Solomon Islands can be quite challenging. In the country, unemployment serves as one of the indicators of economic status.

The unemployment rate in Solomon Islands is at 0.58 percent in 2019 with youths being the majority of those unemployed.

Employment in Solomon Islands is mostly centered in the capital city with only a small number of paid jobs available in the provinces.

Unemployment is a term referring to individuals who are suitable for paid work but are unable to find a job.

Manoj Dhari who resides in Gizo, Western province is one that has faced challenges when it comes to employment.

Manoj Dhari grew up in Gizo where he also went to Gizo community high school. He left school in the 1990s at just form three.

Despite being a form three school leaver, Manoj now counts himself lucky to be in the employment sector. After years of hard knocks, he is now a manager at Fatboys resort.

But this did not come easy.

Like most youths, with no real set of goals and aims in life, Manoj was terminated from a job he had and most of his time was spent in carrying out casual work.

“As a youth, i just enjoyed life and did not think much of it. But then one day, it hits me that I cannot just live like this. I have to do something for myself”, Manoj says.

In 2006 he became a bartender at PT109. A popular pub in Gizo. Thereon he became interested in the hospitality sector.

“At first, I thought of it only as a hobby. Later it became my passion”, Manoj says.

He was with PT109 for three years before he went to Vanuatu.

Manoj says in Vanuatu he underwent a course offered by APTC. After six months he graduated with a certificate in Operation and Tourism. With the knowledge he acquired, he slowly saw a transformation in his life. His attitude changed and he became more focused.

He says after completing his studies he came back to work at Fatboys resort in the Administration and Reservation Unit.

He says Fatboys Resort was happy to accommodate him because of his patience, loyalty and trust.

"I once was caretaker of Fatboys resort for six months. I found it very hard to believe that someone like me would be placed in such a position. But I knew that this was the way forward for me”, Manoj says.

He says it did not stop there. He was shocked when he received an offer from the management for him to take up the position as manager. Manoj became the first local manager for the resort.

"I cannot believe that this opportunity was placed into my hand. I never dreamt of anything like this. It's a dream come true, “he says.

He went on to meet a lot of different people and built strong relationships with foreign investors as well.

“I have learnt a lot from some well-resourced people. They have shaped me to be who I am today”.

Manoj says despite the work being challenging, he did not lose hope.

“I am able to do this because of the opportunity I have”, Manoj says.

He says he became a hard worker and does not want to lose his job.

"I encourage every young person to start doing something because there are a lot of opportunities out there. Opportunities that require hard work, honesty, self-belief and determination”.

Manoj became manager in 2013. Under his management he was able to upgrade facilities at the resort as well as build two new bungalows for the resort.

Fatboys like other tourism operators are going through tough times since the covid-19 pandemic.

This however does not stop the resort from carrying out its operations.