A Refreshing Night in Tavanipupu 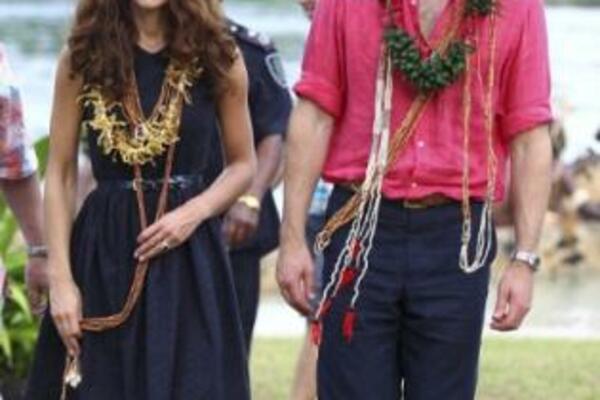 As they landed on the beach, where they were welcomed with garlands of orchids, the couple took off their shoes.
Source: dailymail.co.uk
Share
Tuesday, 18 September 2012 09:18 AM

As the Duke and Duchess of Cambridge landed on the tiny dirt airstrip in Marau on the southern tip of the main island of Guadalcanal, they were challenged by fearsome spear-carrying warriors, in white war paint and whooping aggressively.

The warriors only laid down their arms when, in keeping with local tradition, the chief of the Tetekanji area, Cassiano Lovoli, 65, decided the royal couple were friendly and did not "bring death".

Then four teenage girls presented them with long necklaces made of tiny pieces of shell and dolphin teeth, each of which took up to three months to produce, and which are used instead of money in many of the island communities. The couple's 15-minute visit had caused such excitement that people walked up to six hours through forest paths to get there.

From Marau they were taken to the island of Marapa, where a traditional ceremonial welcome involved men blowing conches and women standing in the water, splashing rhythmically to attract sharks, which they treat with reverence.

"This is amazing," said the Duchess, who had changed into a navy blue Mulberry dress. But the best was still to come, as the couple boarded a traditional war canoe, escorted by swimmers disguised as sharks, who would traditionally have been part of raiding parties when island tribes were at war.

The canoe took them to the tiny paradise island of Tuvanipupu, where the couple spent their last night in a £780-a-night thatched bungalow cut off from the outside world.
As they landed on the beach, where they were welcomed with garlands of orchids, the couple took off their shoes ("and your socks", as the Duchess reminded her husband) and made their way to House No?1, their home until the morning, surrounded by newly-installed bamboo fencing to give them total privacy. The bungalow, one of only nine on the island, has a large open-plan living and sleeping area (including a fridge stocked with champagne), and an indoor bathroom leading to an outdoor shower.

She added: "We've had all sorts of requests from VIPs [who have stayed here], people who have wanted to bring private chefs, fly in furniture and so on. But the Duke and Duchess are so down to earth. They haven't asked for one thing."

The couple began their evening with dinner for two on their candlelit deck, which included chilli mud crab and vegetables from the island's own garden. Mrs Kimberly said that nights on the island were "peaceful and romantic". She added: "There are no motorboats going by on the water, it's still?... sometimes you might get a canoe going by with a local singing. It's special."

After a refreshing night's sleep, their breakfast menu was to include the eggs of coconut-fed chickens, home-made bread, home-made jam, fruit platters and fresh juices. Fresh snorkelling gear had been placed in their bungalow, so that the couple could paddle out to coral reefs in the morning and swim among blue starfish, dugongs, and the occasional reef shark.

Earlier in the day, they had made time in their hectic schedule to spend half an hour talking privately - and cordially - to members of the British media, a tradition on royal tours. It was the clearest possible signal that, despite their legal action against a French magazine for publishing topless pictures of the Duchess, the couple are determined not to allow the episode to encroach on any other aspect of their official duties.