A Milestone for the Development of Elite Sports in Solomon Islands 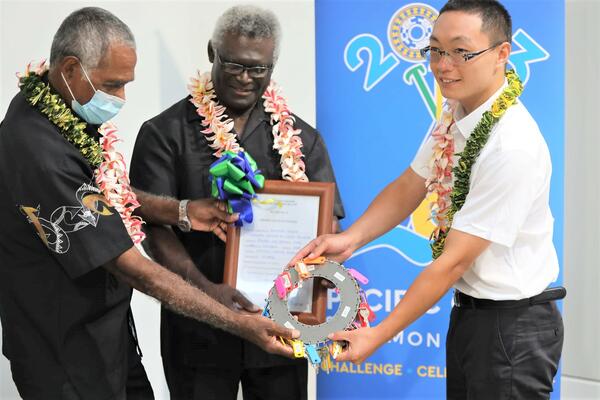 This is the first major infrastructure and investment for sports since the country’s Independence, and is the second of such program in the Pacific region.

SINIS High Performance inaugural Executive Director Aaron Alsop announced that the facility is aiming to have its recognition from the International Association of Sports Performance Centre of Accreditation, a significant achievement for sport in Solomon Islands and the Oceania region.

“There are around 90 sports performance centers around the world with such international accreditation and the country will have its endorsement by early 2022. We will be the second Pacific country to have this accreditation and we will have it announced once we open our programs. For Solomon Islands to achieve that through the vision of this government is something that we should be most proud of,” Alsop said.

“I want to acknowledge the vision of SIG not only just investing on the Pacific Games but also in the athletes and coaches who as people are the real assets of any sport system and as much as this is an amazing facility, what will bring this facility to life is our people."

“We are able to assemble about three quarters of the team that will actually run this program moving forward. 75 staffs that will be employed 95 percent of them will be Solomon Islanders with the strategy to invest in their professional development to see this program move forward," Alsop said.

One of the key programs that will be implemented by the SINIS-HP including; Sports, Training and Education Programs (STEP) which will be one of the largest sports educations in the Pacific and offers a range of internationally recognised courses. Alsop added, the program will be jointly implemented with the Ministry of Education and the Solomon Islands Tertiary Education and Skills Authority (SITESA).

The SINIS-HP will also be in partnership with Australia and New Zealand Volunteers programme who will be providing volunteers to support building the capacity of local staff in a range of program and service areas the facility will be providing. SINIS HP after the 2023 Pacific Games will then be administered by the National Sports Council (NSC)) according to a Memorandum of Understanding (MOU) to be formalized

Chairman of the NSC and the Chair for the Games Facilities Committee (GFC) Joe Sika during his official remarks stated that he believes the legacy project is also to address how National Sport Federations are functioning.

“NSF has not improved from 15 years ago, 5 years ago or even from 2019 PG. Their situation now is still the same as before. We have been focusing on our preparation for 2023 PG and have not paid much attention to our NSF governance and administrations,” says Sika.

Sika further thank the Prime Minister being the Minister responsible for PG2023 and the NHA Chair and members for the vision and leadership allowing the government through NHA to invest in the NSC and SINIS HP.

PM Manasseh Sogavare also during his official remarks reiterated that the project is funded by the Solomon Islands government through the NHA that amounted to SBD $22.6 million.

He said the building is the first major infrastructure associate with the 2023 Pacific Games to be handed over to the government and the NHA, it will be the home for Team Solomon’s to be trained and nurtured to sharpen their skills and compete.

“This event, it conveys a positive message to the Pacific Games Council (PGC) that the country is on track to deliver the PG2023 games on time. What we don’t have before is a dedicated sport facility to further develop the skills of athletes to be competitive. A center of excellence for sport development in the country,” PM Sogavare stated.

He said that the facility and the games will have a transformational effect on the country’s young generation and will be in full operational once ordered equipment arrives in the next three months.

“Thirty staffs of SINIS will move into this facility to commence with programs that will be implemented by our athletes straight after this handover and commissioning of the building.

"All the equipment of this facility had been ordered having overdue to the challenges posed by the pandemic the equipment’s will arrive over the next three months which also means SINIS will be able to be operational over these months at full capacity," the Prime Ministers said.

He then congratulated the constructing China Civil Engineering Company (CCECC) for delivering the infrastructure.

“On behalf of Solomon Islands let me convey to you and your team my sincere appreciation for the hard work that you have gone through for this magnificent building. The timing of today’s (Friday 19th) handing over is historically significant,” PM Sogavare stated.

“SINIS has the largest combat sport training area in the Pacific, this is a remarkable achievement. And I’m making sure the proud legacy of this facility lives on.”