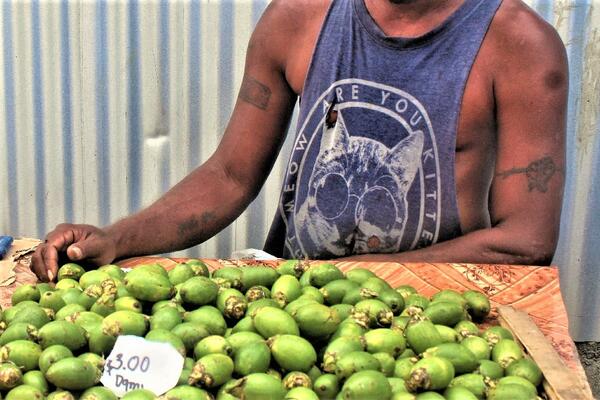 With four children to look after, Peter finds himself in a situation where he was not able to support his family anymore.
Source: Supplied
By Jeremy Gwao
Share
Friday, 19 June 2020 13:24 PM

With fear, Peter discreetly set up his mini market at the Henderson area. Peter is 38 years of age. He lived most of his life at Henderson, just outside of Honiara, but within the emergency zone.

This year would have been his second year at the local university where he studied to be a business teacher in secondary school. But he decided to forego his study so that he can be able to support his family.

A father of four, selling betelnut was his way of earning an income for his family.
Following the orders announced by the Prime Minister, betel nut vendors are not allowed to carry out their business in public places.

With four children to look after, Peter finds himself in a situation where he was not able to support his family anymore.

He sent his children and wife back to the home village saying they will be better off in the village - while he continued looking for ways to earn an income.

From the drastic decline in the betelnut business, income earned is quite small compared to previous years.

Each day Peter is also not free to carry out his business activity as usual as he knows there is a slight chance he might be arrested for carrying out an illegal activity.

“I have to do this now because this is the only way I can get money to support me”, Peter says.

He says seeing that he was able to put food on the table each day despite the hardship, kept him going.

He said he was always troubled for fear of being bullied. His usual day starts at 7am and ends at 11pm.

“I am trying my best to support my family at home”, Peter says. He says he has nowhere else to seek assistance.

“I don’t know how the police will react if they see me”, he continues.

He says since the COVID-19 pandemic, he is also into gardening where he now plants vegetables to sell.

He says life has changed so much for them since COVID. He wished life would not be as hard as it is now.

“I wish that the authorities could see my challenges and not only me but others that are also going through the same problem. We depend much on our market for survival. This needs to be considered or lifted soon,” Peter says.