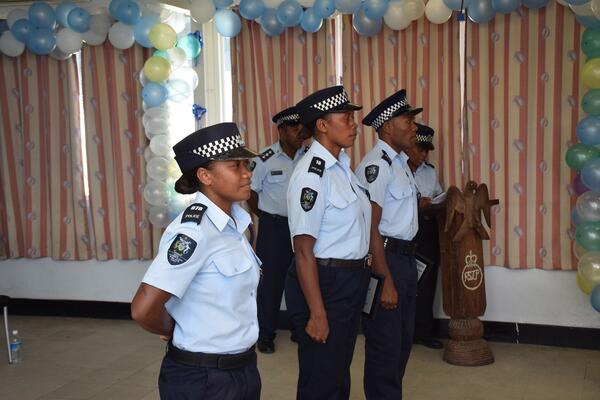 Two female in a group of 69 recruits who completed their training at the Police Academy at the Royal Solomon Islands Police Force Headquarters in Honiara have won three out of the five awards given at the end of the training today.
Source: Supplied
Share
Monday, 08 June 2020 13:37 PM

Two female in a group of 69 recruits who completed their training at the Police Academy at the Royal Solomon Islands Police Force Headquarters in Honiara have won three out of the five awards given at the end of the training on Friday.

Director of the Learning and Development Department of the RSIPF Superintendent Mary Bennett says, “These recruits have passed the academic phase of the recruit training, and have taken their Oath as probationary constables for the next two years.”

“Out of the 69 recruits who completed their training, a male and two female received special awards in addition to their certificates."

“This is a great achievement for the female members of this particular recruit group. I must congratulate these two female constables for excelling during their training,” says Superintendent Bennett.

She adds: “The Baton of Honor was awarded to Police Constable (PC) Brian Lasi. The Baton of Honour is the highest recognition a probationer officer can receive and means PC Lasi excelled in all forms of his training. In the class of 69 the officer stood out achieving high scores throughout the six months training course.”

“I want to personally congratulate PC Lasi for his great achievements during the training course,” says Superintendent Bennett.

“I want to thank the three police constables who received the special awards and the rest of the graduating recruits for the time and cooperation throughout the recruit training course. I wish you all the best as you carry out your duties for your beloved people of this country Solomon Islands,” says Superintendent Bennett.

Due to the COVID-19 State of Public Emergency which prohibits large gatherings, the 69 police recruits were only able to take their Oath in front of the Acting Commissioner, Mostyn Mangau in a classroom at the Police Academy. No parents or other relatives of the recruits as well as other invited guests were present at the low key event.

The 69 probationer police constables will now be posted to Honiara and other provincial centres to serve their two years of probation.