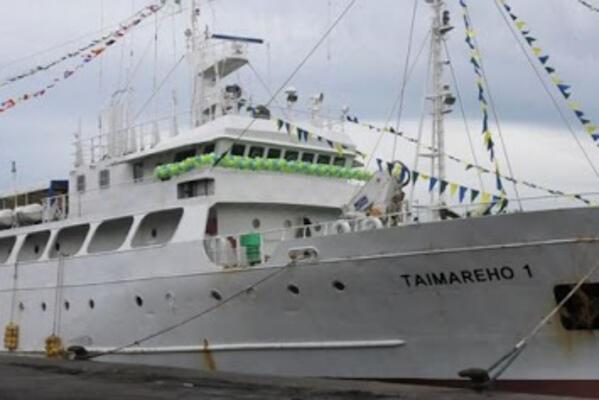 An upgrade of the warning to a Tropical cyclone was made by MET office, an hour before the vessel departed.
Source: Supplied
By Georgina Kekea
Share
Monday, 06 April 2020 08:49 AM

Search is continuing for missing passengers on board the MV Taimareho.

27 people were swept overboard the MV Taimareho in its ill-fated trip on Thursday.

Reports from police say of those missing 19 were male, seven female and a 13 year old.

Marine Vessel Taimareho left Honiara Thursday night for West Are'are in Malaita province when it was met with strong winds and waves from Tropical Cyclone Harold.

The passengers on board were bound for their home village following repatriation advice by government in response to the COVID-19 pandemic.

Prior to their departure, there were already a number of heavy wind and rain warnings by the Met office. An upgrade of the warning to a Tropical cyclone was made by met office, an hour before the vessel departed.

However captain, crew and owners of the vessel did not take heed of the warnings and left with a full load of passengers.

Reports from passengers on board the ship said they met big waves on their way upon leaving Guadalcanal.

A number of passengers were swept from the vessel when they were hit by big waves and winds. It was reported that rescue efforts were hampered by bad weather conditions that night. A rescue helicopter cannot fly as its second pilot was quarantined.

On Friday Prime Minister of Solomon Islands, Manasseh Sogavare conveyed his sympathy to the families and people of West Are'are.

“It is with deep regret to learn that a number of passengers are missing at sea after being washed overboard from a passenger vessel which departed late last night from Honiara, despite the several weather warnings issued yesterday. Search and Rescue agencies have been mobilized to respond while police are investigating the incident. Our prayers are with the families and loved ones of those who are missing,” the Prime Minister said.

Prime Minister Sogavare in his nation-wide address acknowledged that apart from dealing with the imminent threat of COVID-19, the country is also experiencing the impacts of Cyclone Harold.

“I would like to remind our people to take heed of warnings and listen out to advices given by our authorities during such times of disaster as what we are currently experiencing and for all crews and vessel owners to consider the safety of passengers first and foremost,” he said.

So far only five of the missing passengers on the MV Taimareho were found on Sunday. Three of them were already identified while two of the bodies were badly decomposed and are yet to be identified.

The government of Australia is providing Solomon Islands with SBD$500,000 in immediate emergency funding to respond to the damage inflicted by Tropical cyclone Harold.

“We stand ready to assist further as the extent of the damage across Solomon Islands becomes known. Our thoughts and prayers are with the people of Solomon Islands”, the Australian High Commission office said.