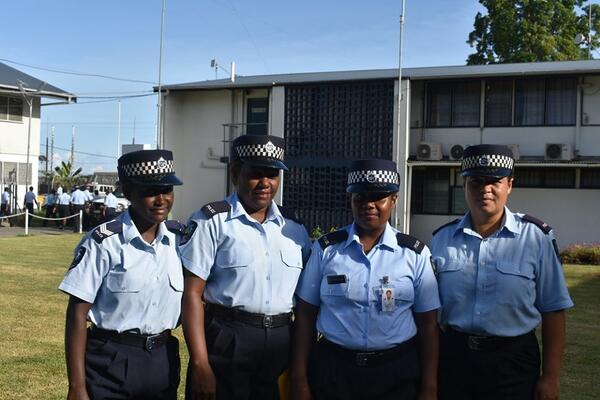 “Blazing the way for younger women,” and “Women are stronger than men think”, that’s the wise words of two female police constables in the Royal Solomon Islands Police Force (RSIPF) who got promoted to the rank of sergeant on 5 March, a few days before Solomon Islands joins the rest of the world to mark International Women’s Day (IWD).

The promotions of 37-year-old Fiona Manataia, from Manakwai Village, Malu’u, North Malaita and 37-year-old Gorethy Teku part Malaita and Makira Ulawa on the eve of the IWD for this year, may be coincidence, but how they both joined the RSIPF and got to where they are in the Force may be a cause for celebration as we remember the struggle of women from throughout the world.

Sergeant Manataia, who is the seventh in a family of eight, was recruited into the RSIPF in 2006.

“I was influenced to join the RSIPF by my one and only brother. Besides that, my family did not have money to continue my studies. And joining the RSIPF meant that I was going to be paid a salary as soon as I started even as a recruit. Furthermore, the sky blue uniform looked really smart and the community respects police officers. So I joined the Force and never regretted it since,” says Sergeant Manataia.

Sergeant Manataia got married in 2008 to a police officer from Tikopia and both have three beautiful girls.

“I got posted into the RSIPF Human Resources Department at the Rove Police Headquarters in 2017. In 2018 my world was shattered. My husband, the father of my three lovely daughters passed away after a short illness.”

“It was a great challenge for me. The tree that usually provided a shadow for me every day had gone. I am now a widow with three beautiful girls. I had to decide whether to continue mourning or pick up the pieces and move forward. My children cheered me up and gave me the will to continue. The challenge of being a widow made me work harder. I need to be strong and have the courage to continue with life. I am now a dad and mum,” says Sergeant Manataia.

“I try to be stress free by engaging in social activities and staying fit, healthy and beautiful by going to the gym regularly. This gives me strength to perform my daily duties both at home and at the work place.”

She continues: “My only advice to women who work in a male dominated organisation like the RSIPF is - respect others and stand on your own principles. Set your boundaries and belief in yourself. You will be respected for who you are.”

“My only advice to other women is to stay fit, healthy and strong as well as help each other to meet our daily challenges. Happy International Women’s Day. Remember, women are stronger than men think.”

For the other female officer, Sergeant Teku, who comes from a family of nine siblings, no one inspired her to become a police officer.

“I started having the desire to become a police officer when I was at primary school. I wanted to join the then Police Field Force. Unfortunately I could not because the Field Force was disbanded by the time I joined the RSIPF.”

For Sergeant Teku, who is single, one of her many challenges as an officer of the RSIPF is making decisions in different situations faced in the line of duty.

“However I come to overcome that challenge through seeking advice from both male and female superiors and the more experienced colleagues,” says Sergeant Teku, who is currently posted in the RSIPF’s Strategic, Planning and Police Department at the Rove Police Headquarters in Honiara.

“To all the beautiful women in the Hapi Isles, nothing is difficult unless we try. Happy International Women’s Day and may God bless as all.”

So as you join the IWD march in Honiara from the SMI in west Honiara through the city centre to the Honiara City Council carpark area today morning, look out for Sergeants Manataia and Teku in their sky blue uniforms with their new sergeant ranks marching together with their male and female colleagues from the RSIPF.