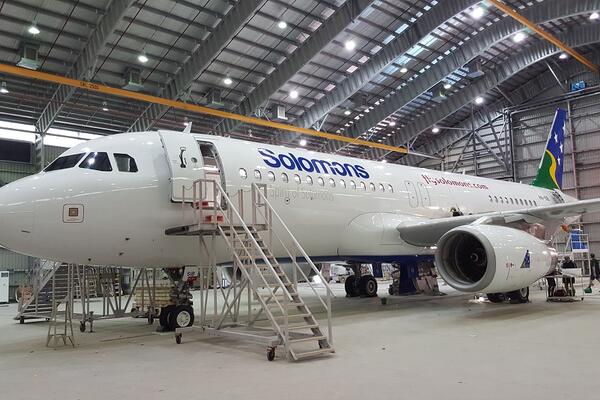 Solomon Airlines has released the first image of the airline’s shiny new Airbus A320 aircraft H4-SIB, which was painted in Townsville, Australia over the weekend.

The aircraft ‘Spirit of the Solomons’ formerly flew for Air New Zealand and is being fitted to Solomon Airline’s specifications before entering service shortly.

Following completion of interior installation the airline will confirm its operating schedule. The new aircraft will be ferried to Brisbane to operate its first scheduled service from Brisbane to Honiara. Solomon Airlines is planning a VIP welcome function at Henderson International Airport at Honiara.

Solomon Airlines Chief Executive Officer Brett Gebers said the new A320 is symbolic of the importance of international air access for the Solomon Islands.

“International services linking Solomon Islands, near neighbour Pacific destinations and Australia are key to future tourism and economic development in the region and updating our fleet is an utmost priority for us,” he said.

“We are committed to ensuring highest safety standards, comfort and reliability across our international and domestic services for visitors and for Solomon Islands people,” Mr Gebers said.

Solomon Airlines is updating both its international and domestic fleet. Approximately 90 per cent of the airline’s domestic operations to 22 destinations within the Solomon Islands are operated by three DHC-6-300 Twin Otter aircraft, with just six airstrips capable of taking its sole Bombardier Dash 8-100.

The airline has completed extensive refurbishment of its Twin Otter fleet and has recently signed an agreement to purchase a further Twin Otter to join the fleet this year.

Solomon Airlines was also instrumental in the extensive upgrade and reopening of Munda Airport in the Western province, renowned as one of the world’s most desirable diving destinations.

Munda Airport can now accommodate international flights providing the country’s second airport to serve as a backup to the Henderson International Airport at Honiara.

The Solomon Islands, population 600,000, is an archipelago nation of nearly 1000 islands situated approximately 2,000 kms to the northeast of Australia in the south-west Pacific Ocean. The capital, Honiara, is located on Guadalcanal, the largest island.