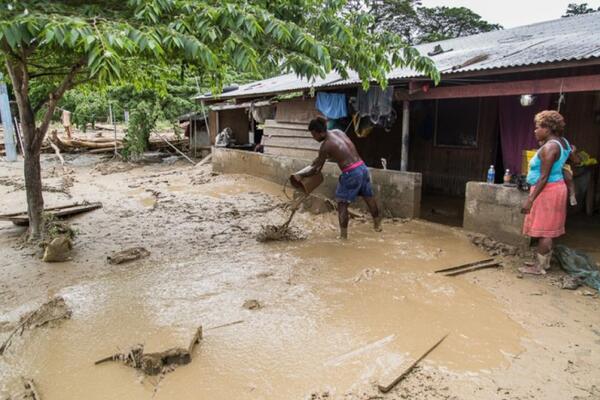 The logging company accepted the death of its employee as caused by the flood and do not wish the police to conduct further enquiries into the death.
Source: File: World Vision
Share
Wednesday, 12 February 2020 11:17 AM

A Malaysian man is dead after a flooded river burst following torrential rains linked to a low depression south of the Solomon Islands.

The 58-year-old Malaysian man who worked for a logging company was killed when a flooded stream washed away the labour line at the Mangakiki logging camp of the Grace logging company on West Guadalcanal in the early hours of 7 February 2020.

Provincial Police Commander (PPC) Guadalcanal Province Chief Superintendent Ishmael Vunagi says, “The water rushed into the labour line and within two minutes it flooded the houses that the Asian employees of the company were residing. Information reaching police say the deceased decided to run back to his room and was washed away and smashed onto a nearby container by the flood. The body was later found among log debris.”

“Upon receiving a report of the incident, police officers travelled to the scene of the incident and conducted enquiries. The logging company accepted the death of its employee as caused by the flood and do not wish the police to conduct further enquiries into the death. The body of the deceased has been since transported to the National Referral hospital (NRH) in Honiara.”

“If you are residing by a river or a stream, I appeal to you to take extra precautions when there is heavy rain as the river or stream may suddenly rise without any warning. We must look after each other. Check the banks of the river or stream several times especially at night and be prepared to move to higher grounds at a very short notice,” says PPC Vunagi.

He adds: “My condolences to the family members and work colleagues of the deceased as they mourn the tragic loss of their relative and work mate.”