Journalist Writes About Lessons From Trip to China 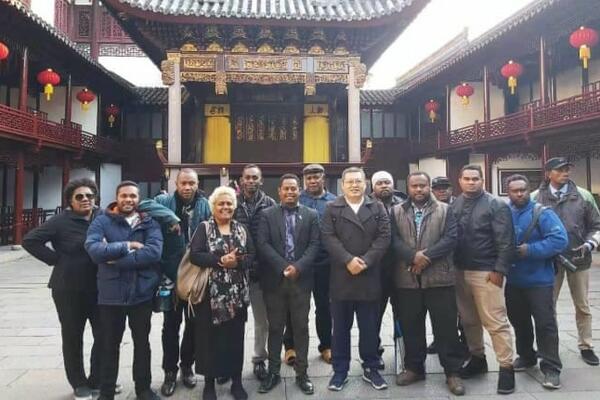 Dorothy Wickham (fourth from left) with a delegation of Solomon Islands’ journalists and media representatives on their tour of China in December.
Source: The Guardian (Photograph: Supplied Dorothy Wickham )
Share
Thursday, 26 December 2019 08:55 AM

After the Solomon Islands switched allegiance to China, it took journalists on a ‘look and learn’ tour to mainland China. Dorothy Wickham, a seasoned journalist, was part of the delegation. She writes about her experience, and observations made during that trip.

The invitation from the prime minister’s office came in mid-November, almost exactly two months after the event referred to as “the switch” – the day the government of Solomon Islands, after more than 30 years of diplomatic allegiance to Taiwan, unceremoniously switched recognition to China.“The PRC [People’s Republic of China] want to take SI [Solomon Islands] media on an ‘Look and Learn’ tour of China,” the email said, “you’re on the list.”

In three decades of covering political developments in the Solomon Islands, the only other event that has generated as much controversy and media attention as the switch was a coup perpetrated in the dead of the night in 2000.

The move away from Taiwan has genuinely perplexed many Solomon Islanders, who ever since have been incessantly debating the implications for our sovereignty, our already waning control over our forests and minerals, our religious and other freedoms and even the economic wisdom of signing up to China’s Belt and Road when for some nations it appears to have been less of a belt and more of a noose around their necks.

So, it was in this context that the delegation of Solomon Islands journalists accepted the invitation for an all-expenses tour to a land most of us had never expected to have the opportunity to go. I know I accepted – just as I have many invitations to conferences and training events funded by the Australian government over the years – in order to be better informed, and ultimately to see with my own eyes how this international juggernaut actually works.

Landing in Beijing, what struck us first was the vast physical scale of the place; the sight of huge structures and seemingly endless rolling boulevards and cities was hard for us islanders to get our heads around.

In Beijing we visited the newsrooms of CCTV and their international branch CGTN. The size of their staff numbers and the digital system they were using were, to us, the equivalent to going to the moon. I was pleased to get the chance to attend a press conference at the ministry of foreign affairs. Conducted fully in Mandarin, the only words I could make out were “Donald Trump”.

One of our team joked, “I will go back and ask our local Chinese, why are you here when you come from a big and better country like this!” He obviously wasn’t thinking about the constraints faced by ordinary people when it came to personal freedoms.

Unsurprisingly these issues were not highlighted on our trip. Given the language barrier there was never going to be any real chance to speak spontaneously or confidentially with ordinary Chinese citizens about the reality of their lives. But that didn’t stop us discussing the issues of freedoms and civil liberties constantly.

We wondered out loud if our leaders actually understood how China carries out its diplomacy and if all we were hearing from around the Pacific and the world, about China being a bully, was true or not. But then again Australia who we largely see as a friendly and decent neighbour is still locking up those seeking refuge on their shores, so what exactly should we expect from this communist dictatorship?

In Guangdong province, from which many of the Chinese people now in Solomon Islands originated, the deputy mayor hosted lunch with a little side dish of frankness. “We still have poor people and we as a country are struggling with our own internal issues,” he said. “Solomon Islands has to find a shoe that fits it. Each country has to find what system works for it.”

The completely new town in Hainan Province, Sanya City totally blew us a way with its fabulous tourism port and new age architecture. I was impressed with what they had achieved in Sanya City but I kept thinking that such a huge leap of development and economic progress would not be possible without total control over the system and people.

I saw China as a country with money to burn and a point to prove. But from the beginning, all I could think was: how can we, a tiny island nation, ever hope to partner equally with this giant of a country, the world’s fastest growing superpower.

By the time our tour concluded in Shanghai, I was personally convinced that our political leaders are not ready or able to deal effectively with China. Solomon Islands’ regulatory and accountability mechanisms are too weak. We have already shown some spirit with our attorney general rejecting a hasty deal to lease the island of Tulagi, the capital of one of our provinces, to a Chinese company, but I fear how fragile and weak my country is against any large developed nation let alone China.

Solomon Islands has always prided itself on setting its own course in international relations, recognising Taiwan for three decades, and in the 1980s, as a newly independent state, standing up to the Americans over an illegal fishing boat fiasco.
In the end, it will be history that judges our leaders and whether the switch from Taiwan to China was the right move, and if they handle it in the country’s best interest. My hope is that in the meantime, the price extracted from our island nation is not too steep or too painful.