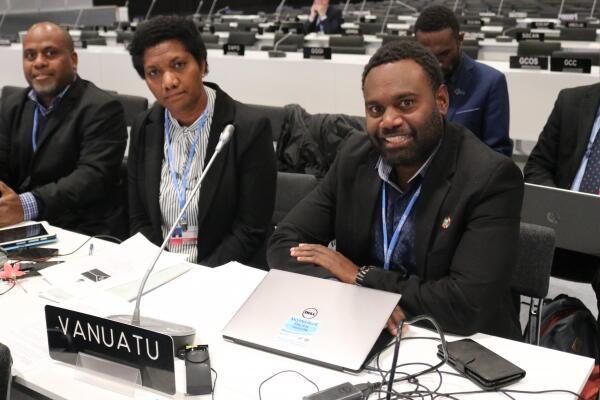 Although Vanuatu is one of the least contributors of greenhouse gasses, the island nation has made a firm commitment in its Nationally Determined Contribution that by 2030 Vanuatu will have 100% of its electricity generated by renewable and sustainable energy.
Source: sprep.org
Share
Friday, 13 December 2019 07:14 AM

In speaking before the High Level Segment of the Twenty-fifth Conference of the Parties to the UN Framework Convention on Climate Change, Ms Esline Garaebiti, the Acting Director General of Vanuatu’s Ministry of Climate Change, called for a full moratorium on new coal mines and new fossil fuel extraction – for the survival of Vanuatu.

Although Vanuatu is one of the least contributors of greenhouse gasses, the island nation has made a firm commitment in its Nationally Determined Contribution that by 2030 Vanuatu will have 100% of its electricity generated by renewable and sustainable energy. It is also promising that its’ next NDC, now in preparation, will be even more ambitious and will include quantified adaptation targets.

Vanuatu called upon all Parties to exponentially ratchet up ambition in their NDCs and to communicate these early next year.

“We urge parties to reach a consensus in the discussions for common time frames and to accept the importance of two separate registries for adaptation communications and Nationally Determined Contributions. We strongly urge parties to ensure market mechanisms deliver rules and regulations that protect environmental integrity while preventing double counting and promoting overall mitigation of global emissions,” stated Ms Garaebiti during the High Level Segment.

“Vanuatu views Overall Mitigation in Global Emissions as one of the most tangible ways we see to deliver higher ambition by going beyond a zero sum game. Hence we need to see progress in Article 6 towards securing mitigation and adaptation ambitions.”

The island nation also called for substantially enhanced and strengthened work on loss and damage in the area of action and support through a new Santiago Network to enable implementation in developing countries.

Climate change finance is also a strong concern for Vanuatu, this was raised before the High Level Segment stating that public climate finance from developed countries is essential for Vanuatu with current levels being inadequate and imbalanced.

Vanuatu noted its concern that the funding allocations by the Global Environment Facility for climate change are declining and that the eligibility criteria has not yet been approved by the COP. Vanuatu also called for the Standing Committee on Finance to present a status report to COP26 next year on mobilisation of the USD 100 billion goal so that a new and increased long term finance collective goal to be quantified and operational by 2025.

“Vanuatu demands that commitments are fulfilled, including for scaled-up and balanced funding for Adaptation, Loss and Damage and Mitigation, and urge the financial operating entities of the convention to strengthen their support to ensure flexible and streamline project approval process and provide enhanced support.”

Ms Esline Garaebiti, the Acting Director General of Vanuatu’s Ministry of Climate Change, presented the High Level Statement from Vanuatu on 11 December, 2019 during the High Level Segment of COP25.

The Twenty-fifth Conference of the Parties to the UN Framework Convention on Climate Change was held from 2 – 13 December, 2019. The High Level Segment was held 10 to 11 December, 2019.