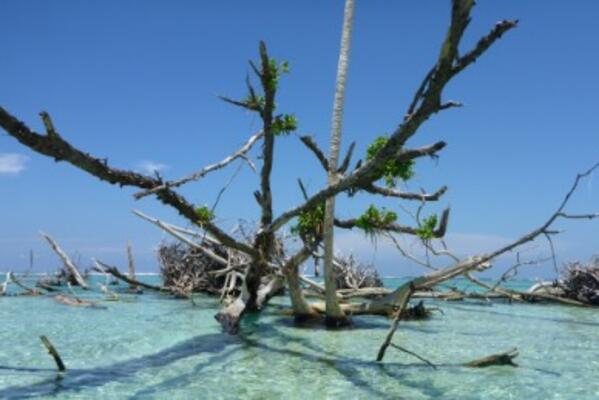 Small island countries in the Pacific are demanding greater commitments at this week's Madrid climate talks, saying what's been done so far is far from enough.

The demand comes as the World Meteorological Organisation released the latest in a run of dire scientific predictions for the fate of the world.

It's the latest of many dire assessments released in the past few weeks - this time from the World Meteorological Organisation. The past decade has been one of exceptional heat, it said, and this year will probably be the second or third warmest on record.

Its secretary-general is Petteri Taalas.

"So far, the warmest year was 2016, when we had the very strong El Niño, which was boosting the warming, but the warming still continues."

Here, delegates are trying to thrash out the final rules to support the 2015 Paris Agreement, where more than 200 countries pledged to limit global warming to at least 2°C.

Professor Taalas said on the current trajectory, warming was likely to be three to 5°C.

The sea is also warming at record rates, he said, which was leading to sea level rise.

"We have some areas where the sea level rise has been more than average.

"For example, the Pacific Island states have been facing higher numbers than the global average, which is of course very alarming for them because they're low-lying and they're the most vulnerable countries worldwide."

One of those countries is Tokelau. Three small-atolls in the Pacific, only accessible by boat journey from Samoa.

Tokelau's leader - or Ulu - Kelihiano Kalolo said what had been achieved by world leaders so far was nowhere near enough.

"What the world has done in the past few years is not even trying to solve the problem, so we have to do more...I think the key to that is to act now if not we will have very sad consequences."

Leaders from small island states say they're pulling out all stops to have their concerns heard and demands met.

The deputy chair of the alliance of small island states, Janine Felson, described the talks as a last opportunity to take decisive action.

And the lead negotiator for Solomon Islands, Melchior Mataki, said the effects of the warming were already being felt in his country.

"We are not seeing any leadership from major emitters as far as reducing emissions...the source of the problem is increasing rising greenhouse gas emissions - we need to work on that."

He said he had seen some promising signs, but with 10 days and plenty of hurdles to go, there was a lot of work ahead.

Source: https://www.rnz.co.nz/ *Jamie Tahana travelled to the COP25 in Madrid, Spain with the assistance of the Secretariat of the Pacific Regional Environment Programme (SPREP).