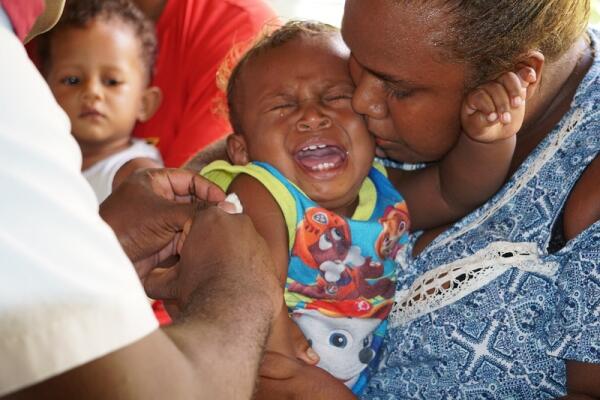 The Solomon Islands Measles rubella campaign ongoing so far has reached over 81,460 children aged 6 months to 5yrs 11months which is 93% of target children.
Share
Monday, 02 December 2019 07:13 AM

The number of suspected cases of measles on the Pacific island of Samoa has more than doubled over the past week to 3,530, and deaths related to the outbreak rose to 48 from 20 a week ago, the country’s Ministry of Health said Sunday.

Samoa has become vulnerable to measles outbreaks as the number of people becoming immunized has declined with the World Health Organization (WHO) saying vaccine coverage is about 31%.

The government started a mandatory vaccination program Nov. 20 after declaring a state of emergency because of the outbreak. The health ministry said in its statement that 57,132 people have since been vaccinated.

Schools and universities have been closed and most public gatherings banned on the island state of 200,000, located south of the equator and half way between Hawaii and New Zealand.

Of the 48 deaths, 44 where among children younger than 4. Since Saturday, there have been 173 new cases of measles recorded and four people have died.

Neighboring New Zealand and a number of other countries and organizations, including the U.N. agency UNICEF, have delivered thousands of vaccines, medical supplies and have sent medical personnel to help with the outbreak.

Measles, a highly contagious virus that spreads easily through coughing and sneezing, has been reported also in other Pacific nations, including Tonga and Fiji, but there have been no reports of deaths and the countries have greater vaccination coverage.

Tonga’s ministry of health said in a statement late last week that there were 394 cases of suspected measles identified, but only eight people required hospitalization.

Measles cases are rising worldwide, even in wealthy nations such as Germany and the United States, as parents shun immunization for philosophical or religious reasons, or fears, debunked by doctors, that such vaccines could cause autism.