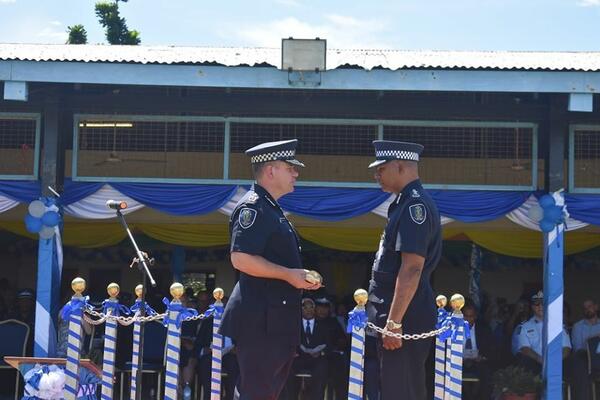 Solomon Islands has farewelled the 13th Commissioner of the Royal Solomon Islands Police Force, Matthew Varley, MBE during a ceremony at the Rove Police Headquarters on Friday 29th November 2019.

During the ceremony witnessed by the Governor General Sir David Vunagi, Prime Minister, Hon. Manasseh Sogavare; Minister of Police, Hon. Anthony Veke; Chief Justice Sir Albert Palmer as well as other dignitaries and senior RSIPF officers from Honiara and the provinces as well as ranks and files, outgoing Commissioner Varley handed the ‘sword’ over to Acting Commissioner of Police, Mostyn Mangau.

In his final speech, which covered a wide range of issues including achievements during his three-year term, outgoing Commissioner Varley said:

“It has been the greatest honour of my professional life to serve as your Commissioner since 25 January 2017. Since my appointment I have had the privilege of working with many RSIPF officers and visiting most police stations, both in Honiara and the Provinces.

“And I have been proud to lead these great officers, and contribute in some small way, at such a momentous period in history for Solomon Islands.

“I have often said, that this police force is the NEW RSIPF. I say new, because we believe that the RSIPF has been re-built from the ground up since the dark days of our history back in Tension era of the early 2000’s.

“Rather we say that it marked the start of the new chapter in our history, when our police force took back full responsibility for providing national security and law & order for Solomon Islands.”