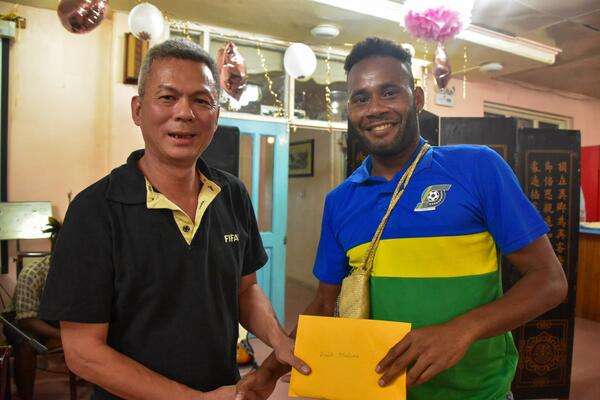 Each player and team official received $5000 each as a token of appreciation for qualifying for a record straight 4th World Cup in Lithuania next year.
Source: SIFF media
Share
Monday, 11 November 2019 08:57 AM

Solomon Islands Kurukuru futsal team was rewarded with a sum of $90,000 for winning their 5th consecutive OFC title at the recent 2019 OFC Futsal Nations Cup in Paita, New Caledonia.

Solomon Islands Football Federation (SIFF) hosted a welcome dinner at the Jina’s restaurant in Honiara last night for the team.

Each player and team official received $5000 each as a token of appreciation for qualifying for a record straight 4th World Cup in Lithuania next year.

SIFF President, William Lai assured the team that his executive has in place plans to prepare the team well ahead of the World Cup.

“As the president, I want to let you know that my executive already has plans to make sure we have a good preparation for the world cup,” he said.

The football boss also paid tribute to major partners of futsal in the country such as SIPA, Solomon Airlines, Bulk Shop, and the government among others who attended the welcome dinner for the champions.

“I don’t want Kurukuru to give away the title during my term as president, however, I want to stress the important roles our sponsor SIPA, the government and other stakeholders play in our success in the region.

“We want to see this relationship continue to grow as we prepare for the world stage,” Lai stressed.

Kurukuru coach Vinicius Laite in his brief remarks highlighted that he was lucky to be given the opportunity to coach an amazing team that is backed by its loyal fans.

“First I want to congratulate every single player because I couldn’t do it without you and the fans,” he said.

“I would also like to thank SIFF for believing in me my first contact with the team was in 2015 and in 2016 we had an amazing time at the world cup.

“Thank you for giving me the opportunity of a lifetime because many coaches who have worked for many years and don’t get the chance to coach this great team.

“I aim to get the team out of the group stage and I believe we can go beyond the next stage if continue to have good preparation.

“To the sponsors thank you for supporting the boys and please continue to invest in this team to keep this sport growing in the Solomon Islands.”

Meanwhile, the Brazilian left the country yesterday for a short break in Australia before the national futsal team resumes training early next year.