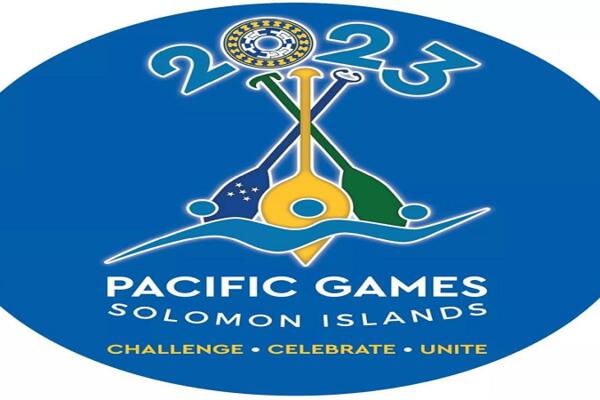 The paddle was used due to its significance not only in the Solomon Islands' culture, but also the wider Pacific community.
Source: Supplied
Share
Monday, 15 July 2019 08:02 AM

Solomon Islands 2023 have unveiled their logo for the next edition of the Pacific Games but have been forced to defend the selection process.

The logo includes the Solomon Islands' national colors, shell money and three paddles.
However, two competitions involving schools and the general public failed to find the winning design which was eventually created by a panel.

The paddle was used due to its significance not only in the Solomon Islands' culture, but also the wider Pacific community.

"Paddle signifies a journey that has a starting point and ends at an intended destination," Solomon Islands 2023 said.

"To be able to get to your journey through the waters you need a direction, navigational skills, planning, team work, management skills and determination to arrive safely at your expected destination.

Solomon Islands 2023 said on their Facebook page that the message the paddle presents is one that, if more than one person are to paddle one canoe, the people must not paddle in different directions, otherwise, they will have great difficulty of getting to their intended destination unless they realize the need to correct the error as quickly as possible and paddle towards the same direction.

The logo was originally meant to be selected as part of a competition among schools in the Solomon Islands, launched in February. Organizers said only three submissions were received by the deadline on March 15, citing communication issues.

Solomon Islands 2023 say they then met with the President of the Artist Association of the Solomon Islands, Robert Au, to see if artists wanted to submit applications. This saw the deadline extended until April 15 and allowed submissions from the general public.

"Sol2023 made it very clear that the rules used for the schools would be the same for the artists or any member of the public who may put in a submission," Solomon Islands 2023 said.

"The rules required each artist to agree to a number of rules in order for their submissions to be considered."

The rules included a signed declaration by all artists which saw them agree on a variety of conditions, including the acknowledgement that the decision reached was final.
Artists also had to declare they would not criticize the verdict in any forum, while a contract would be established before the release of SBD$20,000 prize money.

A total of 21 submissions were received from the public, as well as three artists.
Organizers claim there was "not one logo submitted that was considered to be unique and representative of what Sol2023 determined was the best logo for what we required for the next four years."

A panel then created the logo which is claimed to have each of the elements wanted by organizers, before being included in the final judging stage.

"It was not a matter that the submissions were not good, but that there was not one logo that captured the essence of the logo we wanted," Solomon Islands 2023 said.

"Due to time factor and the fact that the advertisement costs budget had been exceeded, we did not want to re-advertise again but decided to put together one logo that worked for all the elements we wanted and included it with the original designs from the artists before putting all the logos to the judges.

"All the logos were judged by a team that came up with three final ones that were forwarded to National Hosting Authority (NHA) Board members for their final review and approval and in no way any judge or the NHA board members were persuaded to choose the winning logo.

"They all acted independently in the selection process and in the manner in which the winning logo was chosen."

Solomon Islands 2023 have claimed they have operated within the rule The organization has opted to pay each artist who entered SBD$500.

Solomon Islands were awarded the Games back in 2016, having seen off the challenge of rivals Tahiti. They are poised to become the seventh nation to host the Games, which take place every four years.

The 16th edition of the Games are currently taking place in Apia, Samoa.

Source: Inside The Games