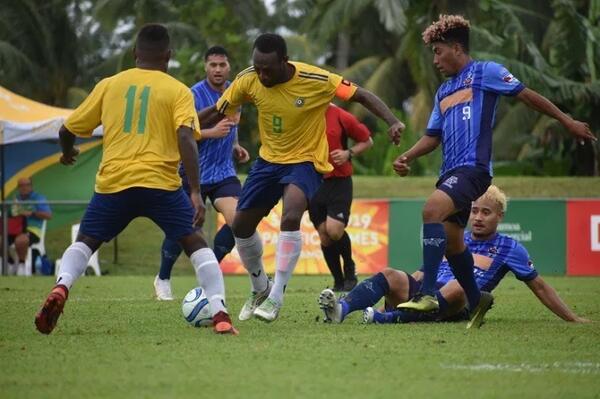 The Solomon Islands head coach and team captain have questioned the way the match against Tahiti was officiated.

The Solomon Islands lost to Tahiti 3-0, and with only 10 players on the pitch it was a difficult task to put up a credible challenge against a very determined Tahiti side.
Goalkeeper Philip Mango got sent off for handballing outside the area, an offence that is worthy of a red card if the action takes away a clear scoring opportunity.

“It’s just on his chest, and Philip’s an honest guy. It hits his chest, but the ref thinks it’s a handball and he sent him off, rather than giving him a yellow. The ball was not going towards the goal, it was going outside. It’s not a goal opportunity,” Totori told Football Oceania in an interview after the game.

“We haven’t had any luck. The refs are not on our side and they’ve made really bad decisions that cost us the game. We would be lucky to have VAR, that would change the game. We are unlucky to lose the game.”

“We tried very hard with ten players and I think we still did a pretty good job to keep up with the other team. After 1-0 we tried to force the game a little bit, but the penalty I think was the turning point in the boys. They still believed in it, but they were running out of gas and unfortunately, I said something about the referees and they sent me away,” Solomon Islands head coach Rijsbergen tells Football in Oceania.

He feels his team deserved more than what they have been getting and raises a question about the standard of refereeing in the tournament, with the referee from Malaysia not having the best of games against Tahiti.

“I think if you see the games then we have to think about also the level of the referees, that’s all I’ll say about it. The boys deserved at least a point [from the last two games], we played very well against New Caledonia and the boys tried very hard and are very frustrated.

“At the end of the game it was good that it ended. One of the Tahiti players kicked one of our players and he’s probably now on the stretchers with some physios, it was getting a bit out of hand and that is one thing that shouldn’t happen,” he says in the press zone after the match.

Solomon Islands will now on American Samoa and Fiji on Monday and Thursday local time and they hope to end with two wins, and maybe book a place in the bronze final, with a bit of luck. Their chances of a gold medal match are all but gone, only a theoretical opportunity still exists.

“We will see how the spirit is for the next game as Fiji and Tahiti are on the same level. It will be tough but we’re still looking for a victory. We have some players who might have injuries but we try to get the best team available for the next game,” Rijsbergen says.

Totori hopes they can do better in the next matches than they did against Tahiti, which also happened to be the veteran’s 50th game for his country.

“I’m very happy to represent my country, but today was not the happiest day. We prepared well for this and the result doesn’t turn out our way. That’s football, things happen and we just need to put our head up and get together for the World Cup Qualifiers and end this tournament on a high against Fiji,” he says.