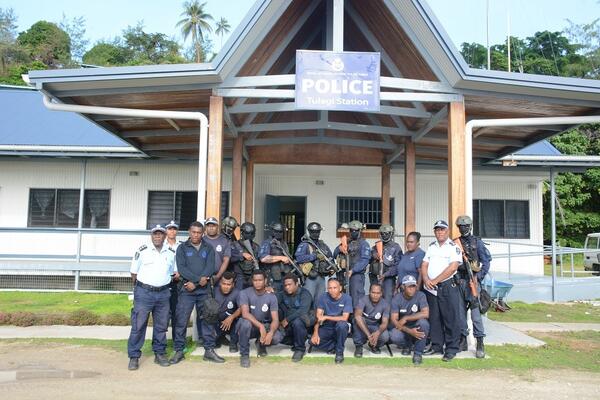 Officers at the Tulagi Police Station and members of the PRT team who assisted during the election of the Central Province premier.
Source: Supplied
Share
Tuesday, 02 July 2019 08:16 AM

A 42-year-old man has been arrested and charged with common assault following an incident during the election of the new Premier of Central Province at Tulagi on 27 June 2019.

“My officers from Tulagi with the assistance of officers from the Police Response Team (PRT) conducted a successful operation during the election of the new Central Provincial Premier on 27 June. The suspect was arrested for allegedly assaulting a supporter of a candidate for the position during the lobbying period,” Provincial Police Commander, Central Province, Inspector Hugh Maelasi explains.

PPC Maelasi adds: “The suspect was placed in the cell at the Tulagi Police Station and charged for common assault. He has since been released on bail to appear in the Tulagi Magistrates’ Court on 15 July 2019.”

“Apart from this single incident, the community in Tulagi as well as the Central Provincial Government acknowledged my officers and the supporting the PRT team for the peaceful environment during the election of the provincial premier,” says PPC Maelasi.

“I too would like to acknowledge supporters of the candidates in the election of the premier for respecting police as the authority for providing security for our people during such events. Police will not hesitate to deal with anyone who tries to break our laws,” PPC Maelasi emphasises.