Police Trained to Conduct RBT on Land and Sea 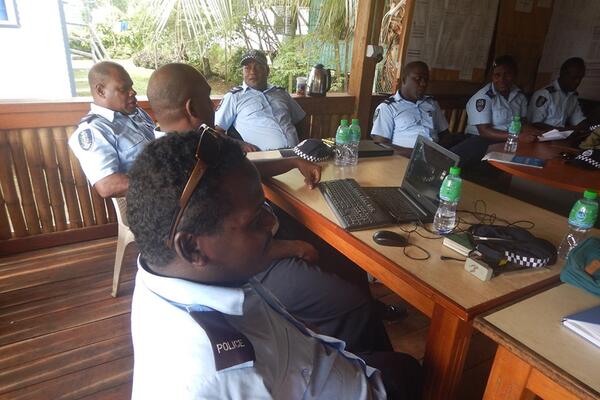 Officers of the Royal Solomon Islands Police Force (RSIPF) in the Western Province will be able to conduct random breath testing (RBT) on vehicle drivers and skippers of boats and ships in that province at the end of a three-day training underway at Gizo 18 – 20 June 2019.

A total of 18 police officers from Gizo, Noro, Ringi and Munda police stations are attending the training conducted by two RSIPF Traffic Instructors from Honiara.

Provincial Police Commander (PPC) Western Province, Chief Superintendent Mathias Lenialu says, “I am thankful that my officers have been given this opportunity to undergo this important training to qualify them to legally conduct RBT on our roads in the Western Province.”

He says, “Thank you to the two instructors from the Honiara Kukum Traffic Centre for making the training possible for my officers.”

“The training will enable my officers to be able to operate the RBT machines to test drivers to ensure vehicles drivers are not under the influence of alcohol and are fit to drive safely on our roads to avoid accidents,” explains PPC Lenialu.

“This is the first training that has been conducted in Western Province for my officers, since the Police and Transport Legislation (Amendment) (ALCOHOL Testing) Act 2016 come into effect on 1 June 2016,” says PPC Lenialu.

He adds: “After the training my officers will be using the RBT machines to test vehicle and even the skippers of boats and ships to ensure that the presence of alcohol in a person’s blood is not above prescribed legal level of 0.05% of alcohol.”

“Let us all work together to prevent any deaths on our roads or waters by following our laws which are there to provide a safe environment for everyone,” says PPC Lenialu.

The training will benefit RSIPF officers in Western Province to deal with the rapid increase of vehicles as well as the increase of out-board motors (OBM) boats in the Province.