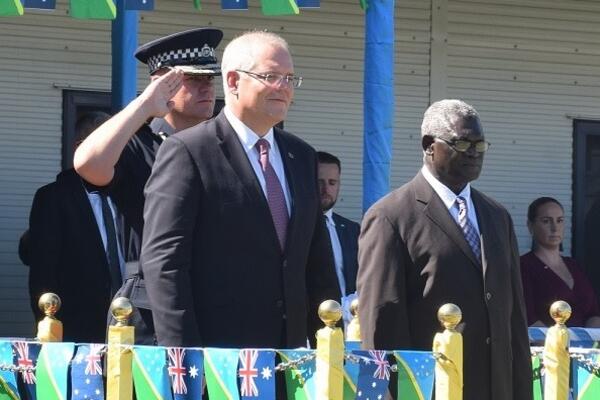 Sogavare says, “The recent National General Elections (NGE) was an important milestone event for Solomon Islands. It was the first election held since the end of RAMSI. “It was also the first election security operation planned and executed solely by the Royal Solomon Islands Police Force. It was a huge police operation – which took more than one year of planning – and involved more than 1700 police and Corrections Officers across the country.”

“The efforts of our strong and capable police force resulted in a peaceful Polling Day on 3 April. Voters turned out in record numbers at more than 1100 polling stations across the country. It was a huge success. It showed our people that democratic elections are the key ingredients for our future national success,” says Prime Minister Sogavare.

He adds: “When lawlessness erupted on the streets of Honiara on April 24th, following my election to be Prime Minister of my country, the RSIPF was our shining beacon of hope and stability.”

“Many of these officers before you today, put themselves in harms’ way to defend our streets and businesses, protect our people and upheld law and order. The fine officers of the RSIPF worked day and night, confronting danger, to live up to their oath of office and to prove to all Solomon Islanders that the RSIPF is now truly one of the best professional police force in the region, that deserves our respect and trust,” Prime Minister Sogavare told his Australian counterpart Prime Minister Morrison.

“To you, the men and women of the RSIPF and the Correctional Services I convey to you all your country’s and your people’s debt of gratitude for your steadfastness to duty, your sacrifices to your country and to your families for their support to you so that you can perform your duties to our country,’ says Prime Minister Sogavare.

“Never before has such a cry for help by our nation been answered so swiftly with precision, steadfastness, diligence and commitment by our disciplined forces that makes our country proud and makes me and my government proud that we have matured as a force and as a nation. I thank you all from the bottom of my heart.”

Prime Minister Sogavare says, “My Government honours our officers and thank you all for your diligence, bravery and devotion to duty. We are proud of the RSIPF, what it has become and what it stands for today.”

“The level of commitment, tenacity and sheer hard work shown during the elections highlighted to me how far the RSIPF, as an organisation, has grown. The RSIPF has grown into one of the largest government organisations in Solomon Islands. ”

Prime Minister Sogavare also paid tribute to the leadership of the Commissioner of Police, Matthew Varley.

“Leading these operations from the front, Commissioner Varley, I pay tribute to your outstanding leadership and commitment to this nation over the past two and a half years and also thank you from the bottom of my heart.”

"From your police advisors support in key areas, to the significant logistics support by the Australian Defence Force leadership in the Combined Task Group. Australia worked as mates with Solomon Islanders and New Zealanders to achieve a significant goal – a democratic, successful and peaceful election. On behalf of my government and the people of Solomon Islands, I thank you and through you your government and the people of Australia.”