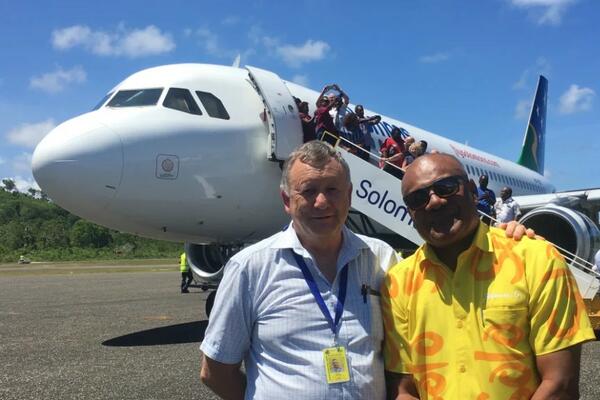 As Solomon Airlines flight IE715 touched down in Munda on Saturday, thousands lined the fences to greet the unfamiliar sight of a commercial airliner at the community’s tiny airport.

Secretly built by Japanese forces at the height of World War II, Munda Airport has just undergone a $30 million upgrade, courtesy of the New Zealand government, allowing aircraft such as an Airbus A320 to land.

And land it did on Saturday, when Solomon Airlines’ inaugural direct international flight to Munda touched down about 3¼ hours after it departed Brisbane.

For the many wide-eyed children pressed up against the fences, seeing an aircraft as large and noisy as an A320 up close was the cause of almost unbridled excitement.

For the equally numerous adults, it meant even more – an avenue for them to grow both economically and socially.

And for Tourism Solomons chief executive Josefa Tuamoto, it was a watershed moment for his nation’s burgeoning tourism industry, particularly in the remote Western Province.

“It’s kind of a euphoria – everyone is excited,” he said. “The community is all behind it – we want to make sure it works. The long term, for us, is to make sure the flight stays. You can’t be excited about the first flight and then let your hands down when things aren’t going so well.”

Mr Tuamoto said it was a big step towards his country’s goal to increase its tourism intake, currently about 30,000 arrivals a year, by about 15 per cent annually.

It was the first baby step in what he hoped would be a long march that would firmly put the Solomons on the tourism map.

Eventually, Mr Gebers said, the Solomon Islands could rival the Maldives as an island getaway.

“We believe it is the final frontier – it is the largest group of unspoilt islands in the world,” he said.

“There are 992 islands here, many of which have nobody living on them. I have said to many people, there are enough islands here to meet almost any requirement. You can have an island with a beautiful bungalow for a single honeymoon couple, with one guy to take care of the cleaning and cooking and everything else – that’s it, it’s your island. It’ll cost you six or seven thousand US a night, or something like that, but that’s possible. Then you could have another island that’s got 12 bungalows that’s the honeymoon island – no kids or anything like that. Then you can have an island that takes into account elderly people and young people; you could have an island for mum and dad and the kids, and another one for the backpackers, and one for people who just want to chill and have massages.”

However, he conceded success could come with its own risks.

“We don’t want millions of visitors, but we need a lot more visitors than what we’ve got,” Mr Gebers said.

“But if it’s managed carefully and if we build the resorts properly, they’re going to be self-sustaining in most respects from a power, water and waste perspective. They shouldn’t have a huge impact on the environment.

Outside of the diving community, drawn to the coral, sunken WWII warplanes and ships in crystal-clear water, Munda is little-known in Australia.

Dive Munda operator Belinda Botha said it was imperative the Solomon Islands not become a victim of its own success.

“We’re in a position where we can learn from the mistakes that our neighbouring countries have made in terms of development and growing too quickly too fast and not protecting their resources,” she said.

As tourism grew, Ms Botha said, so would businesses such as hers. And that meant training and employing more Solomon Islanders, stimulating the local economy.

Currently, Munda and its surrounding attractions are severely lacking in accommodation options, which Mr Gebers said severely limited the potential growth of the Brisbane route.

“We can’t grow the airline until we can grow the bed numbers,” he said.

“It really gets back to absolute basics – if you don’t have beds, there’s no point in flying people there.”

To that end, the Solomon Islands Tourism Infrastructure Development Fund has been established, providing interest-free loans to local hotel and resort operators to improve their facilities, or build new ones.

A 50-room luxury eco-resort was one long-term aim.

“I’d like to see flights to Japan, I think, because of the Second World War connection here,” he said.

“There’s a large Japanese interest in the place.”

The International Monetary Fund estimates the Solomon Islands’ per capita GDP is just $US2145 (Australia’s, by comparison, is $US49,882). For this Pacific island nation, the potential benefits of this new link to the outside world could be invaluable.

Solomon Airlines’ new direct flights to Munda are scheduled to depart Brisbane Airport at 9am every Saturday.

Source: https://www.smh.com.au by Cameron Atfield who travelled to the Solomon Islands as a guest of Solomon Airlines.