Rising Above a Male Dominated Industry 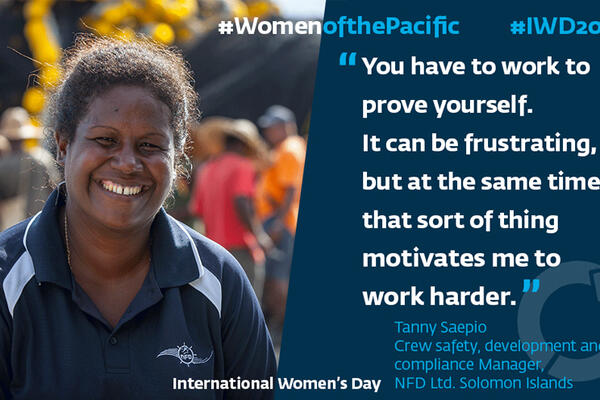 "We females we have to earn men’s respect. I have learnt that it is better to mix and mingle with all equally, than to give space and importance to anyone in particular"
Share
Tuesday, 26 March 2019 07:30 AM

Tanny Saepio was the first female captain in Solomon Islands, and now works as a manager for National Fisheries Development Ltd (NFD).

NFD is the country’s only domestic based fishing company, that supplies fish for its sister company, the country’s only tuna processor facility, SolTuna, based in Noro, Western Province. The company has a workforce of about 300 men, and now has 22 full time female workers, with about another 50 women working part-time and recently took on three women cadets.

The IFC has supported NFD through investment loans to buy more vessels- a move NFD says has created about 50 new jobs at NFD and about 150 jobs at its sister company, SolTuna, the only tuna processing facility in Solomon Islands.

Below is an interview conducted with Ms. Tanny Saepio.

With three female cadets now working at NFD how significant a move do you see that as for the company?
For me I see that it is a good start for NFD to get more females. It’s a male dominated industry and many women fear to take it up as profession and its good that we are working on the gender balance. This helps other companies in the Solomon Islands to see that women are there – show them that we women, we can do what men can do. All jobs have to be treated equally for women and men. It’s good that NFD starts with employing female cadets and encouraging more females to go out at sea and try and explore and do something different, rather than stay and work in an office and sitting around and doing mummy’s job all the time at home.

How difficult is to work in such a male dominated industry as a woman?
It is very challenging but one thing I faced onboard the ship, because I was once onboard the ship – as deck cadet and I’m an officer as well – is that being a female most men assume you aren’t knowledgeable. You have to work to prove yourself. It can be frustrating, but at the same time that sort of thing motivates me to work harder. Onboard the ship is a place where different cultures, people and religion mix. We females we have to earn men’s respect. I have learnt that it is better to mix and mingle with all equally, than to give space and importance to anyone in particular. It’ll be easier for us to work together that way to avoid bullying by others on board.

So it’s very important for you and other females to encourage young girls and women to work in the maritime industry?
Yes we have to encourage more women just to show them. You then can get more women to come onboard the ship. Then we have to try our best to get these women – the young women – to have as high a level of education in marine – so in that way the young females will see the girls doing that and they will reach their qualifications – what they are aiming for and they will be encouraged to come and join the maritime industry. As seafarers is conventionally a man’s world, many women fear to take it up as profession. But I believe fear is nothing but a product of our imagination. Believe in yourself and nothing is unachievable.