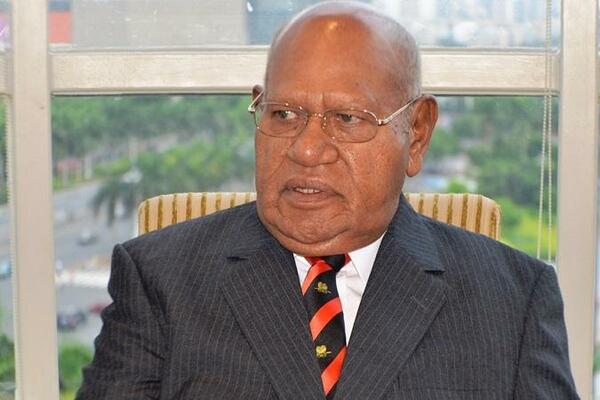 Earlier this year the Bougainville President John Momis proposed changes to the Mining Act that would greatly increase the royalties for local landowners.
Source: looppng.com
Share
Tuesday, 19 March 2019 07:17 AM

The referendum for Papua New Guinea’s eastern region is now set for October but how its outcome will be handled remains unclear.

Earlier this month the date of the Bougainville independence referendum was pushed back. Initially — although tentatively — scheduled for June 15, the poll will now be held in October. Under the 2001 peace agreement that followed a decade-long civil war in Papua New Guinea (PNG), it was negotiated that a referendum on the future status of Bougainville would be held prior to mid-2020. While preparations have been ongoing, it is believed the Bougainville Referendum Commission (BRC), headed by former Irish Prime Minister Bertie Ahern, would have been both financially and structurally struggling to meet the referendum’s requirements by June.

While the delay in the referendum isn’t a great surprise, the exact meaning of the referendum continues to be contested. PNG Prime Minister Peter O’Neill recently stated that the referendum is nonbinding, and that after the poll is conducted the PNG parliament will debate the results, and ultimately decide on whether Bouganville will become the world’s newest country. O’Neill’s assertion that ultimate authority lies with the PNG parliament has the potential to once again inflame tensions between Bougainville and Port Moresby should the Bougainville public vote for independence.

During World War I Bougainville was occupied by Australia, which subsequently administered it within the Territory of New Guinea. Several days before PNG gained its independence from Australia in 1975, Bougainville unilaterally declared independence as the Republic of the North Solomons However, the republic was never recognized by the international community, and it was absorbed into the newly sovereign PNG within six months.

In 1988 the tensions derived from this uneasy relationship became funneled into a dispute involving the Panguna Copper mine, operated by Rio-Tinto. Grievances over the distribution of royalties and the environmental damage the mine was creating led to a revolt by the Bougainville Revolutionary Army (BRA) against the national PNG government, and the subsequent decade-long civil war. A truce was called in 1997, with peace talks sponsored by New Zealand beginning in 1998, and a peace agreement signed in 2001, creating the Autonomous Bougainville Government (ABG). This made Bougainville the only province of PNG to have its own legislature; the governors of PNG’s other 21 provinces all sit within the national parliament.

In October last year the question for the referendum was agreed upon. It states: Do you agree for Bougainville to have: (1) Greater Autonomy (2) Independence. It is an interesting question because it doesn’t offer a status quo option. And this is potentially what is proving problematic for O’Neill, as either option will weaken the position of the national parliament. Beyond this, either option also has the potential to inspire other movements in PNG toward their own greater autonomy or indeed independence. This is a something that is already recognized by O’Neill, with his government signing the “Inter Government Agreement” to begin the process of devolving powers to the provinces of New Ireland, East New Britain, and Enga. However, O’Neill is probably wary of losing control of this process as these provinces witness the Bougainville referendum results.

For Bougainville, however, just how it manages to transition from its current political status to one of either greater autonomy or independence remains contentious. The powers granted to Bougainville under the 2001 peace agreement has effectively allowed it to begin the process of state-building; however, at present only around 14 percent of the ABG’s budget is derived from internal revenue generation. This has created an ongoing debate about whether the Panguna copper mine should be reopened.

Earlier this year Bougainville President John Momis proposed changes to the Mining Act that would greatly increase the royalties for local landowners. Momis told Radio New Zealand in February that the government plans to set up its own joint venture with an Australian company called Caballus Mining to be known as Bougainville Advance Mining. It is estimated that the Panguna mine retains around $58 billion worth of copper and gold, making the reopening of the mine an almost irresistible prospect for the revenue-starved Bougainville government.

Yet the community remains divided over the mine. Being the initial source of grievance that led to the civil war that killed up to 20,000 people, the revenue it could generate for region is not the only consideration to reestablishing its operations. There is a delicate recent memory that will require continued attention. This and Prime Minister O’Neill’s assertion that the results of the referendum would be nonbinding both have the potential to disrupt Bougainville’s current peace if not handled carefully.