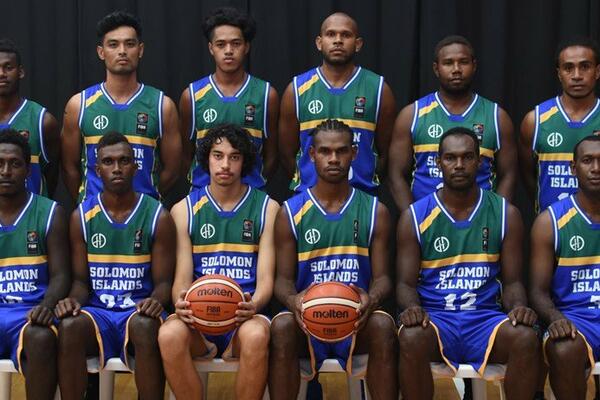 The Solomon Islands will be one of eight teams competing in the basketball tournament at Samoa 2019 in a field including the defending champions Guam.
Source: Solomon Islands Basketball Federation
Share
Friday, 01 March 2019 07:25 AM

The Solomon Islands have been awarded a wildcard entry for the basketball tournament at this year's Pacific Games in Samoa, it has been announced.

FIBA Oceania executive director David Crocker revealed that SIBF's preparation and participation in the 2017 Melanesia Cup and the country's role as host of the Pacific Games in 2023 had been the clinching factors in them being given a place at Samoa 2015, an event due to take place between July 7 and 20.

"The Solomon Islands' bid was very strong and their active participation in recent years has included sending a development squad to Australia in 2017, along with a very well-prepared team at the Melanesia Cup," he said.

"The tournament will also be a good test for their team before they host the event in 2023.

"This is great news for Solomon Islands' Basketball Federation," he said.

"As far as NOCSI is concerned, we accepted the slot and we will work with SIBF to get them to the Games in Samoa.

"Once again thank you very much FIBA Oceania for giving the Solomon Islands the slot."

"PGC is delighted to learn that the Solomon Islands' men's basketball team has been granted a wildcard slot for the Samoa 2019 Pacific Games," he said.

"As the next host of the Games in 2023 and with basketball one of the compulsory Pacific Games sports, the Solomon Islands men's team stands to gain a great amount of experience in Samoa this July.

"It will stand them in good stead as they welcome the region's basketball teams to their home country in 2023."

"We have a talented group of teams for the upcoming Pacific Games and we believe basketball will be one of the most popular sports during the Pacific Games," Crocker said.

"The Games will be extremely competitive and entertaining."

The decision has led to a surge of enthusiasm in the Solomon Islands.

"The Solomon Islands getting the wildcard slot is massive for our basketball communities," Eric Malcolm, who organises the men's team's practices and was head coach of the nation's women's team at the 2017 Melanesia Cup, said.

"After we learned of the decision we immediately had a practice the next night and 36 players showed up.

"The boys have been really proactive and excited for this opportunity.

"We're going to ramp up our preparations for the Games in July."

The Pacific Games is the official qualifier to the FIBA Asia Cup 2025 Pre-Qualifiers with the top two teams advancing to the next round.

The wildcard position for the Pacific Games' women's event is still under evaluation and will be announced when the official decision is final, FIBA revealed.