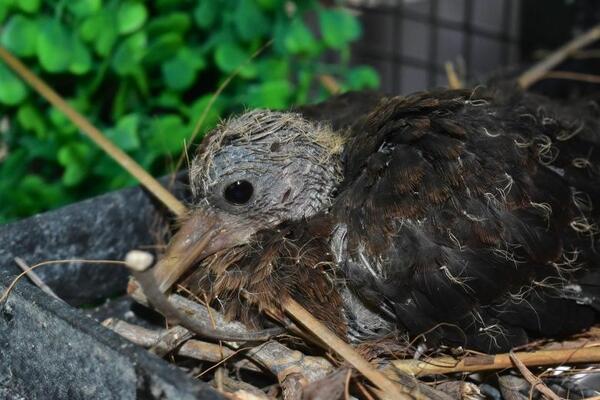 Jurong Bird Park has welcomed four Santa Cruz ground-dove chicks in the past few weeks, marking a world first for the endangered species.

This is the first time that such doves have been successfully bred under human care by a zoological institution, Wildlife Reserves Singapore (WRS) - which manages the park - announced in a press release on Wednesday (Jan 23).

The first of the chicks hatched on Dec 31 last year.

The chicks are the offspring of a group of endangered ground-doves that were rescued from Solomon Islands last August and brought to Singapore.

Sixty endangered Santa Cruz ground-doves - probably half of the world's wild population according to WRS - were "rescued from the clutch of poachers and erupting volcanoes" to form the world's only assurance colony of such doves in Jurong Bird Park, said WRS.

An assurance colony is a group of threatened animals in captivity.

"The goal is to ultimately re-populate their homeland when circumstances allow," said WRS.

Meanwhile, the park has also seen similar success with the critically endangered straw-headed bulbul, one of the most heavily-traded songbirds in Southeast Asia.

It is believed that this species is extinct in half of their range states within Southeast Asia, according to WRS. With just over 200 individuals remaining in the wild according to the local nature community, Singapore is likely the only stronghold of this species, WRS said.

Over the past two years, Jurong Bird Park has bred four straw-headed bulbuls, with the last chick arriving in July last year.

Both the straw-headed bulbuls and the Santa Cruz ground-doves can be seen at the park's Wings of Asia exhibit.