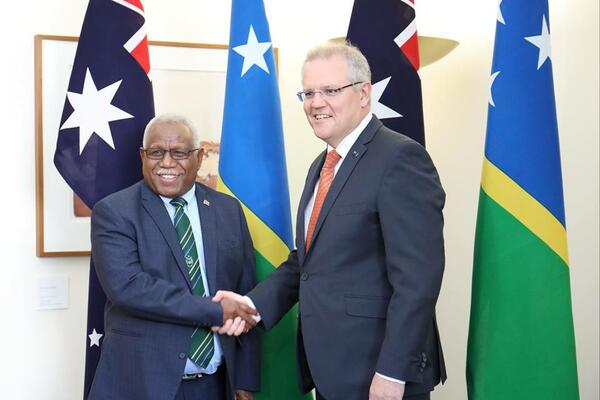 Solomon Islands Prime Minister, Hon. Rick Houenipwela has welcomed the recent announcement from his Australian counterpart Scott Morrison for Australia to establish a multi-billion-dollar infrastructure facility for projects in the region.

This followed the new policy initiative for the Pacific Region announced by the Australian Prime Minister yesterday.

At the same time, Australia will deliver an extra $1 billion in callable capital to Efic, Australia’s export financing agency.

This will complement a new, more flexible infrastructure financing power to support investments in the region that have a broad national benefit for Australia.

The new package includes security, economic, diplomatic and people to people initiatives which will build on strong partnerships in the Pacific.

He said this will also further enhance the outcomes of the Boe Declaration adopted by the Pacific Island Forum Leader’s in Nauru in September this year.

“Australia is a friend that has always been a big brother in our region. This new initiative will definitely build on the ever robust relationship we share with Australia. While the announcement has factored in many areas that we have been working on with Australia, this new infrastructure initiative is a facility that will specifically dedicated to infrastructure development. his is a very critical area for Solomon Islands,” he said.

The Prime Minister said one of the reasons why he was the first Pacific Island Leader to make a courtesy visit to Prime Minister Morrison after his elections in Canberra, was to acknowledge and assure of Australia’s unwavering support in the Solomon Islands and the region.