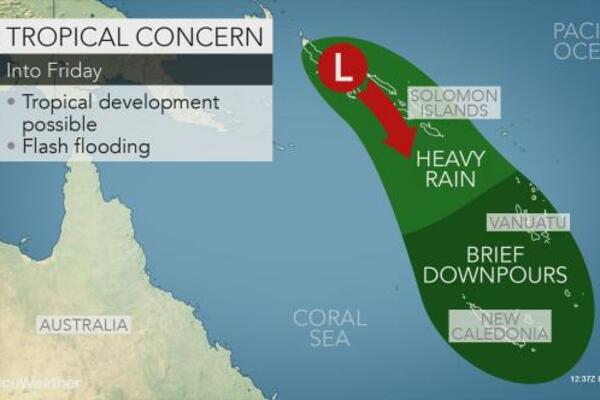 Rain and thunderstorms have already brought heavy rainfall to parts of the Solomon Islands, and additional downpours are forecast in the coming days.
Source: accuweather.com
Share
Wednesday, 26 September 2018 07:35 AM

Even though the official start of the South Pacific tropical season is still more than a month away, an area of low pressure could become a named tropical cyclone in the next day or two.

The official start of the tropical season in the South Pacific Basin is Nov. 1. Depending on where the potential cyclone would develop, it could be named by either the Australian Bureau of Meteorology or the Fiji Meteorological Service and would be named Owen or Liua.

Regardless of tropical development, daily downpours will bring the risk of flash flooding to the Solomon Islands each of the next several days.

Rain and thunderstorms have already brought heavy rainfall to parts of the Solomon Islands, and additional downpours are forecast in the coming days.

Additional downpours will bring the risk of flash flooding. Gusty winds can result in tree damage and power outages across the islands.

As the tropical disturbance becomes better organized, it will drift slowly southeast through Thursday, bringing continued downpours to the same areas.

A turn toward the west is expected late this week into this weekend, then the tropical threat will weaken.

While the tropical threat will remain several hundred miles north and west of Vanuatu and New Caledonia, tropical moisture streaming into the area will produce passing showers and downpours across the islands of both countries into Friday.