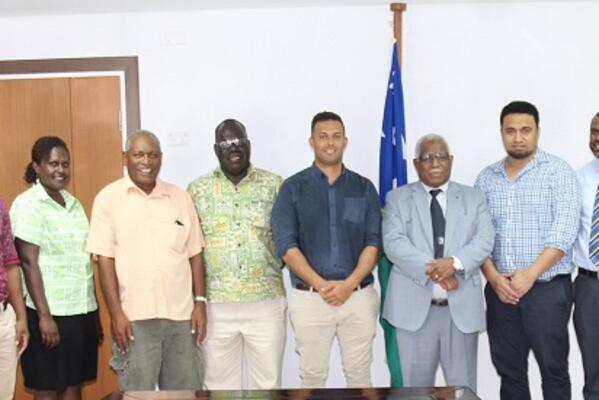 “Our experience with government dialogue and interfaces a couple of years ago was really far apart – and I think it was because of misconceptions, too much expectations and perhaps because of different perceptions,” SICCI Chief Executive Officer (CEO), Dennis Meone, said.

“It was, however, agreed that a better way of working together was needed. Both sectors cannot operate in isolation – it was too obvious that we need each other to grow the economy.

"Regardless of whether you are in Government or business we should be talking to each – and in that space – we can always agree to disagree,” he added.

Mr Meone was asked to provide a progress report on Business and Government collaboration in enhancing sustainable economic growth at the 10th Australia-Solomon Islands Business Forum last week in Brisbane with the core of his presentation on the MoU.

“The MoU came into the picture and it took us more than two years to get it finalized and signed.

"A lot of discussions and negotiations went into motion and the main consensus was we need each other to grow the economy and we need to be taking to each other.

"The initiative was strongly supported by the Government and I pay tribute to senior Government Officials who share the same vision,” he said.

The MoU, between SICCI and the Government, provides a provision for the setup of an Advisory group.

“Now we have a formal and structured dialogue mechanism through the Advisory Group, and we are actually talking, listening to each - probing and critically analysing ourselves,” Mr Meone told the Forum.

Mr Meone said the Group have made traction on some key issues but a lot of work is yet to be done.

“We understand the challenges before us and collectively we agreed that we are picking a few items to focus on and building and harnessing the relationship,” he said.

“If we strip out the structures [you know government and private sector] we can deduce that we all want the same things – and we share the same vision,” he added.

"That is, we all want economic growth, an improved standard of living, jobs for Solomon Islanders, access to better health facilities, access to quality education and the list goes on.

“Both sectors play important roles in such a very small but fragile economic context,” he said.

Prime Minister Hon Rick Houenipwela also addressed the Business Forum last week where he spoke highly of the MoU between the Government and SICCI, as the peak representative of the private sector in Solomon Islands.

“That MoU is envisaged to pave the way for more meaningful participation between the Private Sector and Government, to further the Government’s policy on private sector participation in the economic future of Solomon Islands.

“I am pleased to state that the MoU has been an excellent platform for policy dialogue between SIG and the Private Sector through the Advisory Group meetings,” the Prime Minister said.

Through the Advisory Group, the first inaugural “Prime Minister’s Breakfast address to the Private Sector” was held on 27th June 2018 at the Heritage Park Hotel in Honiara.

The Prime Minister’s Breakfast will now be an annual event.

“I am certain that as a group we will be realistic about what we can achieve together.

“The Advisory Group was instrumental in facilitating discussions between the Government and the business community on the LDC graduation by Solomon Islands, leading to a very robust panel discussion between senior government officials and the private sector.

“Based on this in-depth conversation and consultation, the government has requested deferment of Solomon Islands Graduation.

“I assure you that this partnership between the Government and the Private Sector will soar to new heights,” Hon Houenipwela told the Forum.

Apart from the MoU with Government, SICCI also works in partnership with other institutes and organizations.

“Law and stability remain critical for business confidence and growth and as a Chamber we felt that it is important to get closer to the RSIPF,” SICCI CEO, Meone, said.

“It should be noted that as a Chamber we are always exploring and finding ways to work with other institutions and organizations – including those that have shared similar or like-minded interest.

"The country can achieve a lot if we can work together, appreciating our shortfalls and always looking at ways to improve. We have to start somewhere and it means starting now because if we do not we are simply handing over more problems to the next generation.

"We simply owe it to ourselves and the next generation of Solomon Islanders," says Mr Meone.