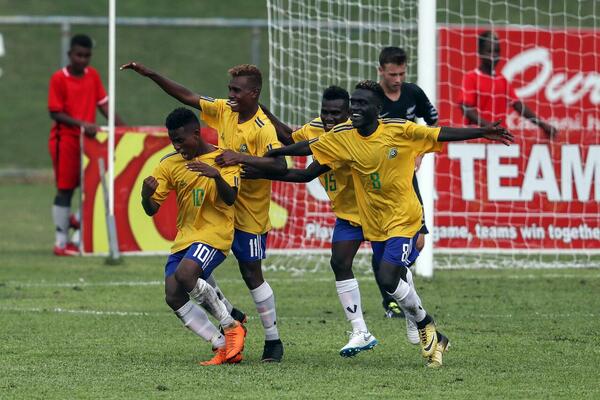 Solomon Islands put up a clinical display of football against New Zealand yesterday afternoon to secure a 5-0 victory and leap-frog to the top of the Group A standings.

It was also a lopsided victory in the day’s opening match as Papua New Guinea bounced back from their loss against Solomon Islands to record a 5-0 win of their own against Vanuatu.

As expected it was the tournament favourites New Zealand who kicked off the game looking like the more organised, more dominant side as they enjoyed an early majority of possession.

Adam Hillis came very close to opening the scoring for the defending champions just three minutes after he connected with a set piece only to head it over the crossbar in what proved a major let off for the hosts.

With the large, vocal crowd behind them Solomon Islands started to find their place in the match and Charles Mani was soon testing things at the New Zealand end of the pitch with an effort that hit the side net.

The defining moment of the match came a short time later as defender Javin Wae met a corner delivery from Raphael Le’ai at the back post, heading it past keeper Luca Taylor to open the scoring.

Mani though he’d added a second in the 25th minute of the match only for the tap-in to be disallowed for offside.

New Zealand seemed like they might get the equaliser they so desperately sought with a couple of decent forays into their opponent’s half, however they were repeatedly denied by their hosts, and forced to deal with a wave of rapid counter attacks.

The constant attacking by the Solomon Islands eventually wore down the New Zealand defence to the point where a heavy touch allowed Le’ai to steal possession and slot the ball past Taylor to give the home side a 2-0 lead going into the break.

A double change for New Zealand coming into the second half injected some fresh legs into the mix, however even that wasn’t enough to stem the attacks from Solomon Islands who continued to out-pace their rivals across the park.

For the second time in the match, Solomon Islands used a set-piece to their advantage with a free kick just off the edge of the area rocketed into the six-yard box where Solomon Islands captain Leon Kofana played it through Taylor’s legs to make it 3-0.

Le’ai completed his brace when he slid in at the back post, connecting with a cross from Philip Ropa. A few minutes later Le’ai again led the charge as he ran the length of the New Zealand half before watching his shot deflect off Taylor into the underside of the crossbar before Maxwell Keana helped it over the line.

An elated Solomon Islands coach Stanley Waita gave all credit to his players for a very important win against a strong New Zealand side.

“It’s a nice win for us, I think it’s a big win. Credit to the boys they have done well as they followed what we told them to do,” the former Solomon Islands international said.

Waita’s instructions encouraged his side to play an attacking game, using their pace to their advantage.

“As I said earlier we have all the advantages in terms of playing on home soil, with the local crowd, and my message for them was we go on and attack.

“We want to go forward, to play positive at all times, we don’t want to sit back so the boys listened and the result came out,” Waita added.

New Zealand coach Jose Figueira agreed it was an exciting encounter and one that his players won’t be forgetting anytime soon.

“I think it will be a game we won’t forget, and just a tremendous learning experience for the boys against a pretty powerful, attacking team that’s pretty relentless,” Figueira said.

“I think for some, obviously this whole trip is a new experience and against opposition like that also, but at the same time it’s putting things into perspective – it’s not over, we’ll have to recover, do our homework and I think take a massive learning experience from this match and hopefully it will kick us on for the rest of the tournament.”

Figueira said one of the most disappointing aspects from his perspective was two of the first three goals coming from set plays.

“We did highlight that’s an area they’ll try to exploit and if we’d just taken one or two of our good three or four chances in the first half it could have been different.

“But I think going into the second half once we had to go for the match the spaces opened up and with the tiredness and conditions a few decision making skills went out the window and a few sloppy passes which allowed the Solomons to counter attack and absolutely, thoroughly deserved win for them.”

In the earlier encounter Papua New Guinea bounced back incredibly well from their opening defeat to become masters of their own destiny with a hugely improved performance against Vanuatu.

Overwhelmingly more organised than in their opener, Akaya Wadunah played a more controlling role from the centre of defence which helped keep the side in formation and on track.

After a nervous start Anthony Pakapota’s side soon found the swing of things and started applying pressure in the Vanuatu half.

It took just seven minutes for Papua New Guinea to find the crack in the Vanuatu defence as Siegfried Beschel latched onto a long ball over the backline and fired it past an approaching Brendon Tankon to open the scoring.

Just over ten minutes later and Papua New Guinea added a second as Renagi Ila got the final touch to put the ball over the line from a corner.

Vanuatu came out of the sheds much stronger than they’d appeared in the first half, playing some decent football and stringing together some good passages of play, however they were unable to really threaten Baniau and his goal.

The third goal came from just three passes after Papua New Guinea won possession, played a pass through midfield before popping it on to Morris Devi who took a couple of touches before firing past Tankon.

Akaya Wadunah added the fourth with a powerful shot from just outside the box into the top right corner, before Beschel made it five with a scooped shot into the top of the net.

Papua New Guinea coach Anthony Pakakota said he didn’t make any changes to his starting lineup from Match Day 1 as he tried to build his side’s confidence back up after their crushing opening defeat.

“For their age, their confidence was really dented from the first game and we had to work on getting their self-confidence back up.

“We wanted to be doing more quick recovery while defending and then going forward at pace.

“We came here to win this game, we fixed up all the errors that we had in the first game and wanted badly to win this to give us a fighting chance in our final game against New Zealand.”

Another heavy loss left Vanuatu coach feeling for his charges, but recognized they were beaten by a stronger team today.

“We worked hard but unfortunately PNG had a good day today too. We were a bit slow and off the pace, but it’s good to see the boys give their best and try to hold their positions.”