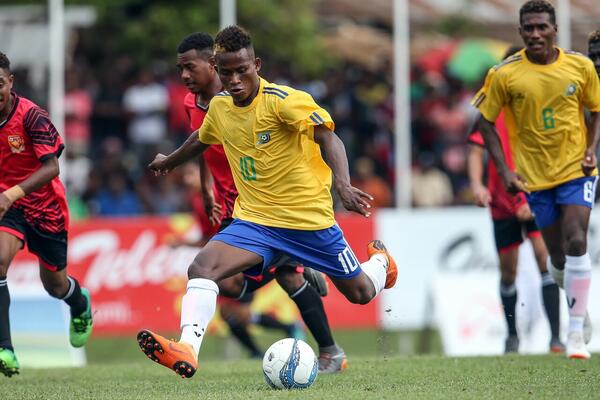 The breakthrough for Solomon Islands still arrived pretty early on as Raphael Le’ai marked his birthday with a perfect gift – the opening goal of the tournament for Solomon Islands and his first as an international footballer.
Source: OFC Media
Share
Monday, 10 September 2018 07:44 AM

Hosts Solomon Islands opened their campaign with a 5-0 win over Papua New Guinea in front of an expected huge crowd in the day’s later kick-off.

It was a nervy opening 10 minutes for both the host side and their neighbours Papua New Guinea as they struggled to get the ball under control with the slippery surface conditions.

Papua New Guinea had some long-range attempts in the early exchanges, while Solomon Island captain Charles Mani missed two golden opportunities with only the goalkeeper to beat.

Mani’s initial shot rebounded perfectly for Le’ai to tap in from close range 12 minutes into the match.

The young Kapuls regrouped after conceding and went in search of a goal of their own, but the home side had other ideas.

Steward Saru was brought down in the box after a good run and Le’ai stepped
up to convert from the spot.

The Solomon Islands dual international completed his birthday hat-trick to hand the hosts a 3-0 lead at the break.

Papua New Guinea had some good opportunities in the second half to score but good defending from Leon Kofana and Javin Wae kept them at bay.

Despite the downpour in the later stages of the second half Chris Satu and Le’ai managed to score as the hosts walked away with a 5-0 win over their Melanesian neighbors.

Solomon Islands coach Stanley Waita said the pressure of playing at home get hold of his players in the opening minutes of the encounter.

“We started off a bit slow which we were not supposed to do,” he said.

“We wanted to play a high intensity game but we managed to come back with a goal which gave us confidence.

“For the boys this is there first time to play in front of a big crowd and they’re all a bit nervous. For me, well done to my boys and I give credit to PNG for coming hard during the game.”

Waita congratulated Le’ai for his five-star performance to mark an auspicious occasion.

“As expected Raphael has done extremely well today, I told him in the dressing room that today is his birthday and he need to do something to give him a birthday present.

“So today, he did what we wanted”, Waita added.

Papua New Guinea coach Anthony Pakakota gave credit to the hosts but insisted that lack of concentration from his players contributed to the result.

“Solomon was too good and too clinical in the first half,” he said.

“We stood and watched them, let them play and they were able to get those quick goals in. In this kind of tournament, you let goals in, you start slow, it will be difficult to get back into the match."