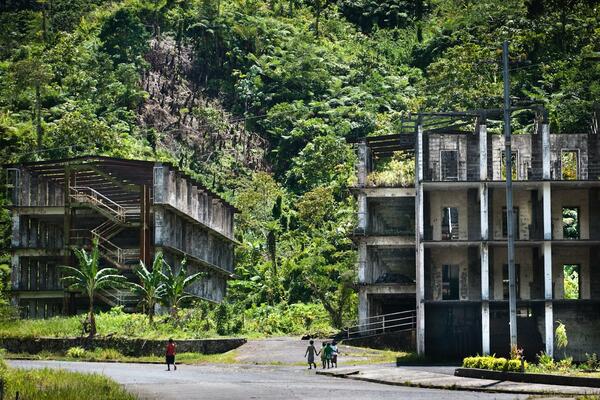 Abandoned buildings in the former Paguna mine site in Bougainville, main island of the Autonomous Region of Bougainville of Papua New Guinea.
Source: iancbooth.blogspot.com
Share
Friday, 13 April 2018 07:27 AM

The Government in the Autonomous Papua New Guinea region of Bougainville says it will not allow exploration or mining activities at the Panguna mine site until landowners unite.

The president of the Autonomous Bougainville Government (ABG) says mining companies must win the trust of landowners if they want to operate the Panguna mine.

Two companies have been battling to re-open the mine, a move the government had been touting as vital to developing Bougainville's economy.

But at the end of 2017, President John Momis announced a moratorium on mining at Panguna and in a new statement he says it is 'absolutely clear the landowners and the people of Panguna are divided over their preferred developer.

Bougainville Copper Limited (BCL) ran Panguna until the outbreak of civil war in 1989 in which grievances caused by the mine were central to the 10 year conflict that cost over 20,000 lives.

He said after debate in the ABG House of Representatives that it was very clear this decision could not be avoided and has been made in the best interests of the landowners and the people of Bougainville as the region prepares for its referendum next year.

Mr Momis says landowner leadership at Panguna remains unresolved creating factional groups with opposing views and positions on how the mine should be developed.

He says as long as the landowners remain divided the moratorium will remain in place.

Mr Momis says the ABG had invested a lot of effort trying to unite the landowners but while most Bougainvilleans are in favor of reopening the mine, the Panguna landowners are holding the region to ransom.