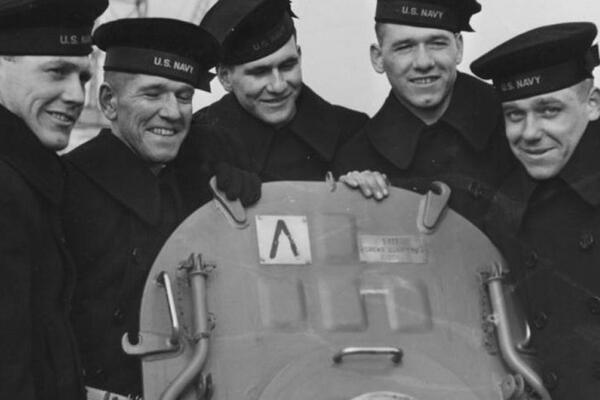 The underwater research vessel R/V Petrel—the ship-hunting craft funded by co-founder of Microsoft Paul Allen—added to its astonishing list of recently discovered shipwreck when it detected the final resting spot of the U.S.S. Juneau.

The Atlanta-class light cruiser was sunk by Japanese torpedoes during the battle of Guadalcanal in the Solomon Islands in November 1942. The explosion and its aftermath killed 687 members of the ship’s nearly 700-person crew.

According to a press release, the Petrel identified the ship lying on its side on March 17 about 2.6 miles below the surface. The following day, the identity of the vessel was confirmed using underwater cameras.

That the ship happened to be spotted on St. Patrick’s day is somewhat fitting, since the Sullivan brothers, the close-knit members of an Irish-American family, whose story inspired the 1944 film The Fighting Sullivans, were five of the men killed in the tragedy.

“We certainly didn’t plan to find the Juneau on St. Patrick’s Day. The variables of these searches are just too great,” Robert Kraft, director of subsea operations for Paul Allen, says in the release.

Sarah Gibbens at National Geographic reports that the Sullivan brothers, George, Frank, Joe, Matt, and Al, natives of Waterloo, Iowa, enlisted in the Navy together soon after Pearl Harbor. While Naval regulations did not allow siblings to serve in the same unit, the Sullivans refused to join unless they were allowed to serve together. Their deaths became a national story, the Naval History and Heritage Command writes, eliciting an outpouring of sympathy and condolences. An image of the brothers was used to sell war bonds and their remaining family, their parents and a sister, spent the rest of the war traveling to more than 200 shipyards and manufacturing plants to inspire workers to keep up the pace to end the fighting more quickly. Two Navy ships, one commissioned in 1943 and one built in 1993 were named The Sullivans in honor of the brothers.

The U.S.S Juneau had a short service life in the war. Launched in February 1942, the ship engaged in the Battle of Santa Cruz Islands in October 1942 before being assigned to protect the aircraft carrier Enterprise. It engaged the Japanese fleet at Guadalcanal on November 13, taking a torpedo to the side. Later that day, while heading to a nearby island for repairs, a Japanese submarine launched two torpedoes, which hit the Juneau.

According to the press release, the explosion cut the ship in two and killed the majority of the soldiers on board. Though as many as 115 crewmembers survived the initial sinking, when rescuers arrived days later, only 10 survivors remained.

This is not the first wreck found by the Petrel. Earlier this month, the ship located the wreck of the U.S.S. Lexington, an aircraft carrier destroyed during the May, 1942, Battle of Coral Sea. Last year, the ship found the U.S.S. Indianapolis the ship that delivered the components of one of the first nuclear bombs to the Northern Mariana Islands in 1945. It also discovered the Italian naval ship Artigliere last year and the Japanese battleship Musashi in March 2015.