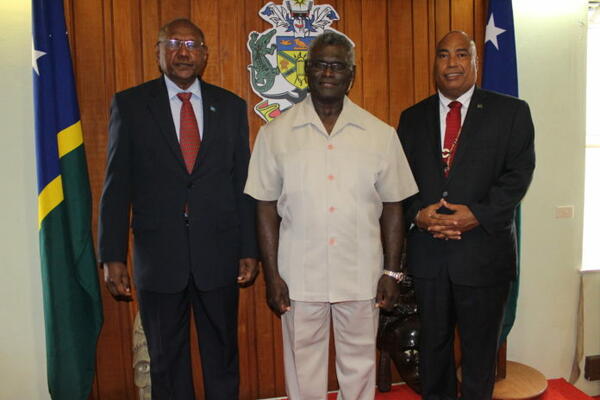 In commissioning the new Solomon Islands High Commissioner to Australia, Prime Minister Sogavare said, “I am confident that you are eminently fitted both in your personal qualities and experience in the affairs of State for the charge the Government of Solomon Islands has entrusted on you and to which you have now pledged your allegiance.”

“As High Commissioner to Australia, your task is first and foremost to represent and promote the interest of the Government of Solomon Islands in the country to which you have been accredited.”

The Prime Minister told His Excellency Beck that the Government and People of Solomon Islands expect him to provide sound advise and deliberation on all matters during his tenure of office.

He said the matters to be dealt with could be political, economic, social and cultural but they should not be compromised by personal interests or other forms of persuasions.

“Your full commitment is expected. You are the link between Solomon Islands Government and the Government of the country to which you have been accredited.

The Prime Minister also told His Excellency Beck that, “In true Solomon Islands tradition, your office and home will be the safe haven for Solomon Islanders in time of need.”

In response, His Excellency Beck assured the Prime Minister of his continued allegiance to the service of the Solomon Islands Government and People in his new country of accreditation.

“It is a humbling experience and with humility and honour I take on this new assignment entrusted on me as Solomon Islands High Commissioner to Australia.

“I commit myself to break from business approach and with a sense of purpose to do more and pushing boundaries of diplomatic relations to realise the true and full potential of the Solomon Islands- Australia relations.

“I commit myself to work with passion, energy and respect and use all my skills and experience acquired in the last 28 years to live up to the expectation of the office and the charges read out by the Prime Minister.

“I will endeavour to work closely with the (Solomon Islands) Government and the Ministry of Foreign Affairs and External Trade to take the evolving, multi- dimensional and strategic partnership between Solomon Islands and Australia to new heights.”

Prior to his new appointment as High Commissioner to Australia, His Excellency Beck served as Solomon Islands Permanent Representative at the United Nations from November 2003 until October this year.

His other previous overseas posting was at the Solomon Islands Permanent Mission to the European Union where he served as Counsellor from September 1993 to January 1995.

He hails from the Western Province. He and wife Hellen have two children.