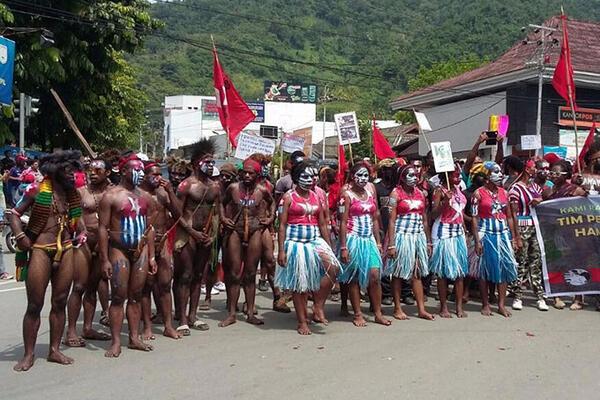 It is now 55 years since the Morning Star flag was flown officially in West Papua for the first time on the 1 December 1961.

The West Papuan people continue to raise their flag as an act of celebration but also in protest against the injustices they suffer under Indonesian rule. They can face up to 15 years jail for doing so.

Jakarta is becoming increasingly concerned at the internationalisation of the issue of West Papua which is why the security forces have been cracking down on peacefully rallies organised by civil society organisations in West Papua.

The most recent crackdown was on the West Papua National Committee (KNPB) as they celebrated their eighth anniversary last week – 106 people were arrested in Sorong.

However, thousands of West Papuans have been arrested at rallies throughout the past year in West Papua. Although the majority of activists were eventually released, during the arrests activists were regularly beaten and in some cases faced torture.

In Sorong, police ordered a Papuan praying congregation to disperse, accusing them of separatism.

There has been a huge groundswell of support around the world and in the Asia-Pacific region on the issue of West Papua.

Seven Pacific leaders raised the issue of West Papua at the 71st Session of the United Nations General Assembly in New York in September.

From the Solomon Islands, Prime Minister Manasseh Sogavare said in a statement:

“The Solomon Islands is gravely concerned about the human rights violations against Melanesians in West Papua.

“Human rights violations in West Papua and the pursuit for self-determination of West Papua are two sides of the same coin.

“Many reports on human rights violations in West Papua emphasize the inherent corroboration between the right to self-determination that results in direct violations of human rights by Indonesia in its attempts to smother any form of opposition.”

Flag-raising ceremonies planned in Auckland on Thursday include: