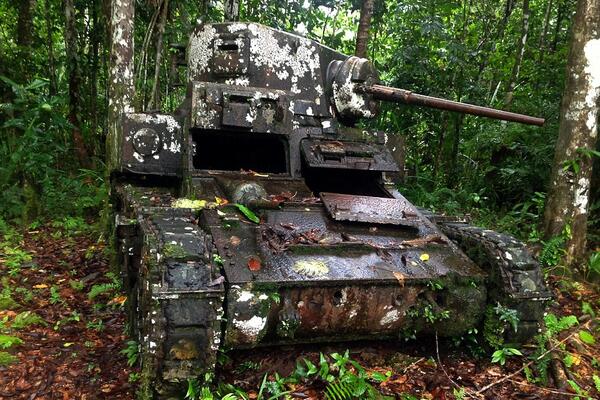 A World War Two American Stuart tank lies in the same spot where it was immobilised by Japanese forces on Kohinggo Island in 1943.
Source: www.dailymail.co.uk
Share
Tuesday, 06 September 2016 07:17 AM

Solomon Islands is looking to attract more military history enthusiasts to Guadalcanal, which is famous as the battleground for the allied offensive against the Japanese during World War II.

Relics from the battle are still turning up, with the remnants of fighter planes being discovered under the sea recently.

Some of the aircraft had remains of American pilots still in the cockpits.

John Innes, a historian specialising in the Guadalcanal campaign, said the artefacts are a window into the past of a legendary battle.

"It was the first time Japanese territory was taken from them by United States forces," Mr Innes told Pacific Beat.

"It was the first time anybody had taken ground back off the Japanese. It was the turning point in that sense."

Mr Innes said he was working to help develop the area as a tourist attraction for military history enthusiasts.

"The war buffs are continuing to roll in and with the 75th anniversary of the Americans landing coming up next year... that will create a lot of interest," he said.

Mr Innes said the Solomon Islands Government is planning to preserve many of the historic battlefields.

"They are optimistically looking to the future to preserve something like the Kokoda Trail for future generations," he said.