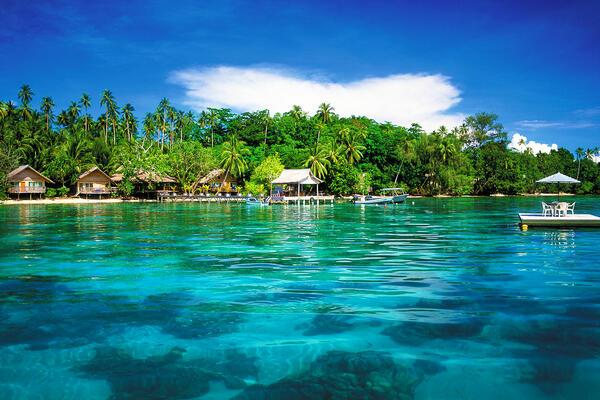 Like any other Pacific country, Solomon Islands is also under threat to Climate Change.
Source: visitsolomons.com.sb
Share
Friday, 15 July 2016 07:49 AM

An international treaty is under consideration by Solomon Islands and other 14 Pacific countries to ban new coal mines and embraces 1.5C target set at Paris climate talks.

The world’s first international treaty that bans or phases out fossil fuels is being considered by leaders of developing Pacific islands nations after a summit in the Solomon Islands this week.

The leaders of 14 countries agreed to consider a proposed Pacific climate treaty, which would bind signatories to targets for renewable energy and ban new or the expansion of coalmines, at the annual leaders’ summit of the Pacific Islands Development Forum (PIDF).

Mahendra Kumar, climate change advisor to PIDF, said the treaty proposal was received very positively by the national leaders. “They seemed convinced that this is an avenue where the Pacific could again show or build on the moral and political leadership that they’ve shown earlier in their efforts to tackle climate change,” he said.

Then in 2015 Australia and New Zealand foiled an attempt by the developing countries in the older forum to take a 1.5C target to last year’s Paris climate change conference.

But the treaty being considered by the newer group embraces the aspirational 1.5C target set at Paris, setting mitigation targets that are in line with it, as well as establishing adaptation mechanisms to cope with the effects of that warming.

Written by a coalition of non-governmental organisations called the Pacific Island Climate Action Network (PICAN), the model treaty will be the subject of consultations, which will result in a report to the summit next year.

Kumar said it is unlikely to be adopted within one year, but it was possible it could be adopted the following year, in 2018.

Joeteshna Gurdayal Zenos, acting head of Pacfic Net, which is Greenpeace Australia Pacific’s climate justice project, said: “Pacific island leaders are among the most proactive in the world on global warming because their countries are bearing the brunt of climate changes.

“Their willingness to consider a Pacific climate treaty shows much-needed leadership on the world’s most pressing environmental challenge,” she said.

In a report that presents the model treaty, PICAN said: “The rationale is that potential Parties to the Treaty already possess the political courage and commitment needed to adopt a flagship legal instrument that is sufficiently ambitious to prevent catastrophic changes in the global climate system.

“Such a treaty, when implemented in collaboration with PIDF and civil society, would send a powerful signal to markets, governments and civil society around the world that the end of fossil fuels is near, with Pacific Islanders acting not as victims of climate change but as agents of change.

“As there is currently no treaty that bans or phases out fossil fuels, the Treaty would set a pioneering example to the rest of the world.”

It says parties will ensure “universal access” to clean energy by 2030, and would establish a “Pacific framework for renewable energy” to achieve that goal.

The treaty would establish a fund, which would provide compensation for communities that have suffered climate change-related losses.

The proposed treaty also has sections on climate-related migration and adaptation.