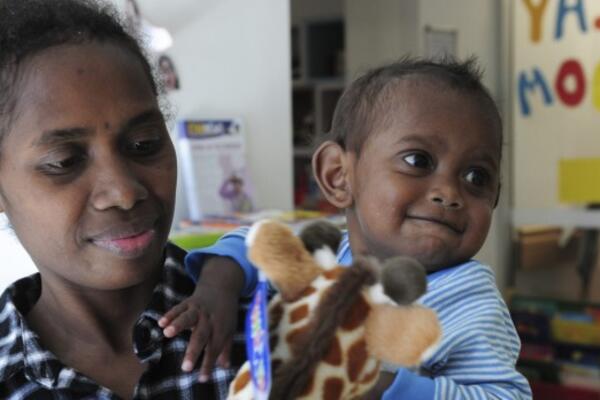 A baby boy from the Solomon Islands has undergone a lifesaving operation at the Canberra Hospital after enduring two attempts at the National Referral Hospital in Honiara.

The 22-month-old, Charlie Rao, and his mother Mary Ribe, were flown to Canberra from Honiara as part of a Rotary Oceania Medical Aid for Children program.

Charlie was born with Hirschsprung disease, which causes intestinal obstruction. He had two surgeries in Honiara to bypass the bowel through a colostomy bag. The first was put in the wrong place, and the second "stuck out like an elephant trunk".

An Australian-born child with the same disease as Charlie would have it picked up and operated on weeks after birth. The part of bowel that was not working would be removed, and the baby would then be able to continue life as normal.

The Canberra Hospital's paediatric surgeon David Croaker first met Charlie on a on a visit to the Solomon Islands last year, on one of his many volunteer trips to perform life-changing surgery on children in developing countries.

He knew then that the operation would have a better chance of success if performed in Canberra, where the right infrastructure and medical facilities were at the ready.

He said the operating theatre in the Solomons capital had been condemned. The roof leaked, some of the ceiling had fallen down, the floor was cracked and water was seeping through.

In the recovery ward, just two of the 12 lights worked which made for a "rather dark" environment.

In situations like Charlie's, Dr Croaker calls on the help of the Rotary program to get the child to Australia.

As part of a Memorandum of Understanding with The Canberra Hospital, it costs ROMAC less to have the child operated on in the nation's capital than it does in any other hospital in Australia. The program is supported by the John James Foundation, which recently donated $5000, and funded the first trip to Honiara last year where Dr Croaker met Charlie.

ROMAC chair Sandra Mahlberg said the she gets about 100 referrals a year, but the program can only look after about 45 of those children.

"It is expensive," Ms Mahlberg said.

"We usually pay for every day they're in hospital, then the operation and everything."

Charlie is the 18th child from the program to be operated on in Canberra.

Dr Croaker will try to remove the dead parts of his bowel, by sending each piece removed to pathology until they know when to stop. He hoped he could send Charlie home without a colostomy bag.

While it sounded like a tedious procedure, Charlie was in good hands. Dr Croaker has a PhD in the disease, and has been operating on children for ROMAC for almost 10 years.

"We enjoy doing these cases because they're professionally interesting and … they're people who really need something," he said.

Charlie will spend up to three months in Australia with his mum and a volunteer host family in case of complications following surgery.