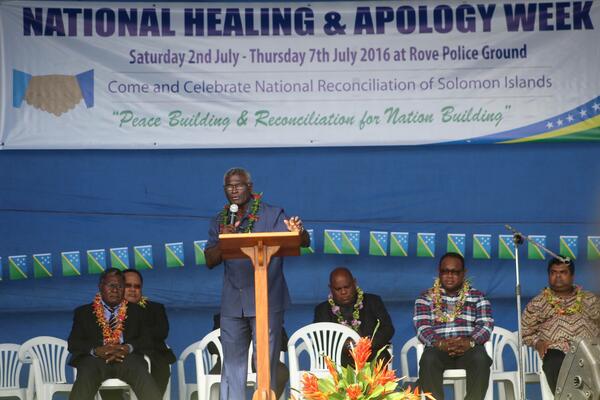 “Our hearts are not in tune with our profession of religiousness and this programme is about getting the formula right. We must be willing to emulate the character of God in forgiving one another," says the Prime Minister.
Source: Prime Minister Press Secretariat
Share
Tuesday, 05 July 2016 07:52 AM

Prime Minister Hon Manasseh Sogavare yesterday apologized to all Solomon Islanders on behalf of all National Government’s that ruled Solomon Islands since Independence for allowing the country to go down the path of ethnic crisis.

The Prime Minister made the national apology at the opening of the National Healing and Apology Programme in Honiara this morning. The programme is part of the ruling Democratic Coalition for Change Government’s policy intention to ensure lasting national peace and stability after the ethnic crisis that prompted the deployment of the Regional Assistance Mission to Solomon Islands.

Delivering his message of National Apology, Prime Minister Sogavare said, “As the current Prime Minister of our beloved country, I would like to take this opportunity on behalf of the leadership of the National Governments since July 1978 to say sorry to our people throughout the country for allowing our beautiful Solomon Islands to go down the path of ethnic crisis in year 2000.

“The event of 5th June 2000 will go down in the annuals of our history as a striking reminder to all of us and more specifically people in positions of responsibility and leadership in government to accept the truth that no man is an island in our quest for nation-building and that our development policies must take into account our diversity and unique situations.

“We are literally a nation of island states that is so diverse in terms of ethnicity, customary practices and development aspirations but we failed miserably as a nation to appreciate this fact.

“As a matter of fact, we paid dearly for our carelessness. We did not give enough thinking into understanding the interplay between the three pillars of our system of governance, namely Government, Religion and Custom and how they affect each other so that we design our system in a way that is sensitive to the intricacies of our diversity, taking into account the role played by the three pillars,” Prime Minister Sogavare said.

Elaborating on the Pillar of Religion, the Prime Minister said the fact that Solomon Islands collapsed amidst its claim of being a predominantly Christian nation that runs its affairs under the principles of Democracy shows something missing in the equation and he would like to believe that this has to do with its relationship with God.

“Our hearts are not in tune with our profession of religiousness and this programme is about getting the formula right. We must be willing to emulate the character of God in forgiving one another.

On the Pillar of Governance, the Prime Minister said considering the failure of the Government to address the people’s concern, having more governments and structures of government may not be the way forward to addressing this concern and this is what he would want the country to take serious note of in light of its efforts to relook at the structure of its system of government.

On the Pillar of Custom, the Prime Minister said, “As a matter of fact, custom and customary values are totally sidelined in our governance system for years and for the first time, the DCC Government is taking this matter up as a strategic policy to consolidate our peace process. It takes a crisis for us to realize our mistake.”

The Prime Minister said adding salt to wound, the National Government over the years has been caught up in the agenda of polarizing power centrally since the country attained nationhood so much so that it even failed to make the Provincial Government System work.

“Consequently, development has been highly centralized and over time we systematically forget the development needs of our people in the rural area and again it takes a crisis for us to come to our senses. But more needs to be done to realize the high expectations of the people in this matter.

“In doing that the leadership of successive National Governments failed miserably to appreciate the truth that it is the wealth created by the utilisation of resources extracted from the jurisdiction of Provincial Governments that keep the country going and yet we have been returning peanuts to the Provinces from revenues generated from their resources. It takes a crisis to see this gross injustice.”

Turning to the land administration legal framework handed down by the administrators of the Protectorate, Prime Minister Sogavare said, “It is the single most insensitive legal framework that existed in this country,” adding that, “it is only biased only towards the needs of the Government in terms of land development, without the slightest appreciation of the need to respect the original landowners.”

He said the present constitution rightfully places the ownership of the country’s land in Solomon Islanders but failed in practice to recognize the customary land tenure system in any meaningful way and the court system further compounds the problem to an already complicated situation.

The Prime Minister said he must admit that the Solomon Islands Government over the years has failed to appreciate the fundamental principles of the country’s traditional land tenure system, which amongst others recognized that:

• Land is communally owned and is inalienable under any circumstances whatsoever. The so-called other ways of inheriting land in custom are in reality concerned with the right of usage. Land in custom remains permanently the property of the tribe;

• The concept of ownership differs from the capitalist sense of ownership. The relationship is one of custodianship under the broad principle of stewardship. Individualisation of title to land in custom is unheard of in most parts of the country; and

• In their dealings in tribal land, Solomon Islanders are cognizant of their obligations to their departed ancestors and the generations yet unborn, thus placing them in a position of stewards. This fact alone establishes the principle of ‘inalienability of customary land’ for very good reasons in custom.

He said he must also admit that successive Solomon Islands Governments have failed to appreciate and take these fundamental principles into account in their land-reform programmes, which again, only concentrated on making land available for development through the process of alienation.

“This is something repugnant in custom and without realizing it, the Government over the years was only fuelling animosity in the people and making them stateless in custom.

“This carelessness created a situation where innocent Solomon Islanders were forced to take up arms against each other and inflicted atrocities at the level unimaginable against our own people. Our people were placed in a situation created for them by the carelessness of the National and Provincial Government because no rational human being would do what they did.

“The people’s responses to the unbearable effect of the Draconian Policy which brought the country on its knees in the year 2000 is perfectly understood and the National Government would be irresponsible to respond to this concern in any other way than to design a policy response that tackles the concern head-on.

The Prime Minister expressed admiration for those who served their time in jail for the crimes they committed during the ethnic tension, adding that he is pleased to know that most of them are now actively involved in peace-building work and church activities.

He acknowledged the untold psychological and physical suffering that the innocent victims of the crisis had to go through, adding that many of them are still struggling to come to terms with normal life.

“Your stories are taken up in the Truth and Reconciliation Commission Report and have been brought to the attention of the Government and I would also like to take this opportunity to say sorry to you,” the Prime Minister said.
Prime Minister Sogavare said, as a strategy to address the outstanding issues of the ethnic tension the Government will adopt a holistic approach.

“The Government is finalizing the recommendations of the TRC Report which suggests ways of attending to the issues and concerns of both the perpetrators and the victims of the tension and they will be taken up in the proposed Reparation Bill to be tabled in Parliament when it is ready.”

The Prime Minister also apologised to the victims of the Bougainville Crisis, especially those in the Batava Wars in Choiseul Province and others along the Western borders with Bougainville who are still waiting to have their issues addressed by the National Government.

“It is now more than 20 years. I acknowledge your patience and I’m truly sorry for the injustice and inconvenience caused.”

The opening ceremony was attended by the Cabinet Minister’s, Provincial Premiers, Heads of Foreign Diplomatic Missions in Honiara, Head of the Regional Assistance Mission to Solomon Islands, Commissioner of Police and Police officials, Government officials, Members of the Solomon Islands Post Conflict Rehabilitation and Restoration Association and members of the public.