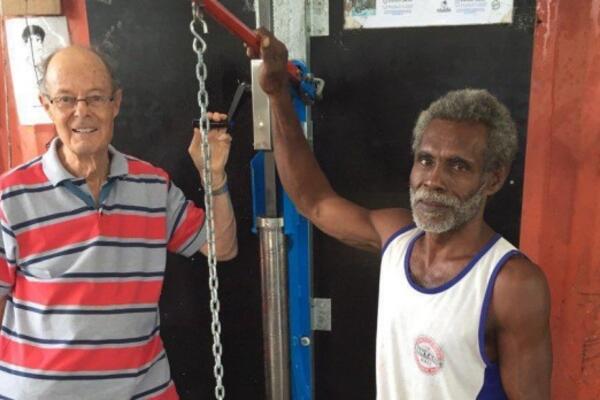 It was a question of social justice that sparked Dan Etherington's? quest to revitalise the Solomon Islands' small-scale coconut industry.

Given the wealth of products that could be derived and sold from the ubiquitous fruit, why were the Pacific archipelago's coconut farmers among the world's poorest?

That disconnect led Hawker's Dr Etherington to develop technology that allowed villagers to produce their own cold-pressed virgin coconut oil – a simple invention that has made a real difference to the wellbeing of the nation's village communities.

Dr Etherington, an agricultural economist, researched coconut industries in the tropics as an Australian National University academic and first visited the Solomon Islands in 1981.
Advertisement

"I was blown away by the coconut because of the extraordinary range of products you can get from coconuts and that was the spark that got me interested," he said. "From rubber trees, you get rubber; from tea plants, you get tea; from coconut you get 101 different products and yet the farmers growing coconut were the poorest and that seemed strange to me."

At the time, copra, the dried white flesh of the fruit, was the only export product gleaned from thousands of coconut trees on the islands.

To harvest copra was hard, dirty work. Its export price fluctuated significantly and farmers never saw the oil or the money it made.

His intellectual interest morphed into a humanitarian concern after he watched as the country was "paralysed" by Cyclone Namu in 1986, as malaria deaths skyrocketed and the price of copra plunged to $US150 a tonne.

Driven by his deep Christian faith, Dr Etherington and his wife Maureen felt called to help the country rebuild.

He went about discovering a method to extract coconut oil on a small scale so residents didn't need to send the copra overseas.

A "Eureka moment" came when he heated dessicated coconut and water, stuffed the mixture into an adapted corking gun and watched as the oil flowed.

Dr Etherington went on to develop a press known as Direct Micro Expelling Equipment, and Kokonut Pacific now works with 600 coconut farms in the Solomon Islands and has installed 40 presses across five islands.

"It's developed now to enable villages to produce up to 60 litres a day and they'll do that six days a week. They're producing 300 to 400 litres of oil a week in a village."

Dr Etherington said the technology produced high-quality oil and led to "radical" changes in those communities, including significantly boosted incomes for farmers.

"The flow-on effects are enormous in terms of children being able to be sent to school, people being able to access medical treatment. The villages themselves are strengthened."

"It has been absolutely fundamental to a very significant improvement in income levels and lifestyles of the people."

Dr Etherington and his wife set up Kokonut Pacific to import some of that oil to Australia and sell coconut products in the early 2000s. The family company now employs nine people in Australia.

A high-profile push against saturated fats which started in the 1950s made it difficult to market the products at first, but Dr Etherington said the perception of coconut oil had shifted dramatically and led to an upsurge in demand in recent years.

Kokonut Pacific is now riding the wave of popularity in coconut oil and coconut products, driven largely by paleo, clean eating and sugar-free diet trends.
"People are re-examining coconut oil and saying it's not as bad as we thought, we need saturated fats in our diets," he said.

There are plans afoot for a coconut technology training centre in the capital Honiara and Dr Etherington said the couple didn't have any plans to fully retire.
"We're only touching the edge of what is possible. The coconuts are there, we just need to develop new methods.

"The story has not come to an end but it has been a very exciting journey."
Coconuts – the good oil?

A recent surge in popularity of coconut oil and products such as chips, yoghurts and butter has proved controversial and ignited heated debate among health professionals.

Organisations including the Heart Foundation and Dietitians Association of Australia have warned the oil might not be the super-food it's cracked up to be due to high levels of "unhealthy" fats.

The DAA believed there was not enough evidence to recommend consumers choose coconut oil over other unsaturated, plant-based fats such as olive, avocado or canola oils.

Heart Foundation dietitian Shane Landon said consumers should be cautious of the "hype" around coconut products and warned some health claims could be based on information that was "not of the best quality".

"Coconut oil is extremely high in saturated fat so of course there is an increased consumption of LDL cholesterol which in turn can lead to a higher risk of heart disease," Mr Landon said.

"Overall, it's not an oil we would recommend."

While Mr Landon said there was nothing wrong with the occasional use of coconut oil, most Australians consumed too many saturated fats and needed to reduce their consumption where possible.

He encouraged shoppers to test the veracity of health claims made on coconut products by checking with their GP or a reputable health organisation, or comparing the product's nutritional information with other similar foods.
"It does come back to a little bit of due diligence," he said.