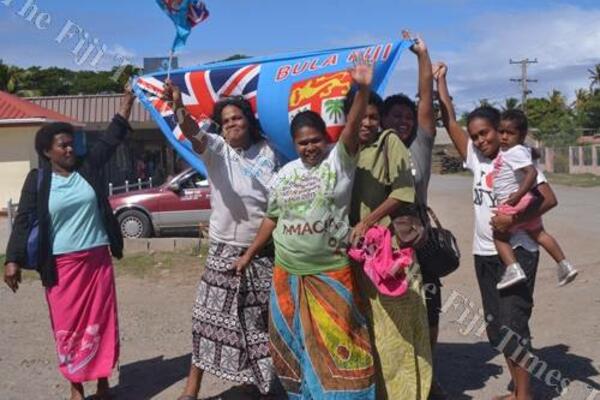 Semo villagers in Fiji on the roadside waiting to meet the country's rugby champs.
Source: fijitimes.com
Share
Friday, 22 May 2015 07:24 AM

Despite the team arriving late than the scheduled 4pm, fans waiting in Suva did not budge from their post fearing they would lose a chance to see the players.

Fiji National University student Fane Sivoki, 20, said she did not mind waiting to catch a glimpse of her heroes.

"We have been here from 3pm to greet the boys for winning the HSBC Sevens Series. We will continue to wait until we see the players' never mind if they are late or it starts raining heavily," Sivoki said.

Another ardent fan, Ana Lavelawa, waited with her eight-year-old grandson on the streets of Suva to see the team and their spoils.

"We are so proud of the boys for winning the series and bringing the victory to us. We have been chatting with other fans while waiting for the boys," she said.