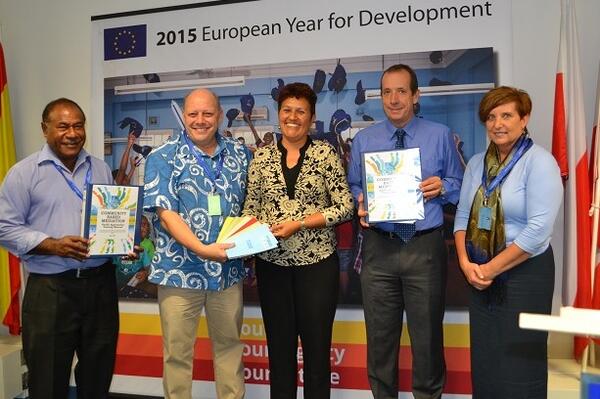 The compendium of 10 case studies on peacebuilding and dialogue practices throughout the Pacific region, which were developed from on-t he-ground experiences of local peacebuilders was captured by UNDP’s Strengthening Capacities for Peace and Development in the Pacific (CPAD) project.
Source: eeas.europa.eu
Share
Wednesday, 20 May 2015 07:59 AM

The Community Based Mediation Pacific Approaches Training Manual and the collection of 10 case studies Sharing and Exploring Pacific Approaches to Dialogue: A Compendium of Case Studies from Pacific Island Countries was launched by HE Mr. Andrew Jacobs, European Union (EU) Ambassador for the Pacific.

"Peace-building lies at the heart of the European Union, for it is one – if not the key reason, which led to the establishment of the European Union. As such, we are proud to partner with the UNDP and with Civil Society Organisations such as the Pacific Centre for Peacebuilding in their efforts to improve the lives of communities impacted by conflict and violence," Ambassador Jacobs said.

"The platform for the development of the peace-building manual was laid back in 2008 when DFAT (or AusAID back then) supported the Foundation of the Peoples of the South Pacific International and PCP in developing its original version. Seven years on, the EU is pleased to build on this earlier effort because the demand to address conflicts at the local and national levels remains high in the region," Ambassador Jacobs said.

The Community Based Mediation Pacific Approaches Training Manual written by the Foundation for the Peoples of the South Pacific International (FSPI) and PCP, is a manual for community-based non-governmental organizations to help communities deal with social, governance and development problems with consensus base approaches to problem solving.

“PCP is grateful for the opportunity and privilege to learn from the community development practitioners of FSPI in being able to develop this manual that is relevant for their respective contexts,” said Koila Costello-Olsson, PCP Executive Director.

We are glad to be able to share these learnings with you in your work for people-centred development, human rights and good governance using peacebuilding approaches.”

The compendium of 10 case studies on peacebuilding and dialogue practices throughout the Pacific region, which were developed from on-the-ground experiences of local peacebuilders was captured by UNDP’s Strengthening Capacities for Peace and Development in the Pacific (CPAD) project.

“It is important to recognize the many ways in which local peacebuilding efforts have helped prevent and address conflicts and consolidate peace in the region in the last few years,” said Peter Bachelor, Manager of UNDP’s Pacific Centre. “We hope these case studies will be a useful resource for the network of Pacific peacebuilding practitioners we have helped build since 2010” he added.

The EU and UNDP have for the past few years, partnered to support civil society and local government actors in their efforts to advance public dialogue on a variety of development issues in the Pacific.