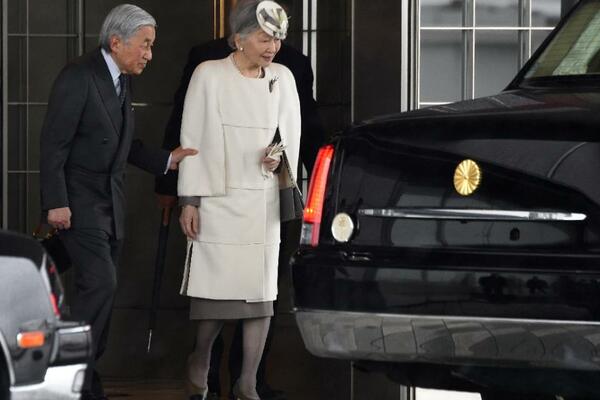 Akihito, accompanied by his wife Michiko, will meet Palauan President Tommy Remengesau, as well as the leaders of the Marshall Islands and Micronesia, also former colonies of imperial Japan.
Source: news.yahoo.com
Share
Thursday, 09 April 2015 08:11 AM

Japan's imperial couple has arrived in the Pacific island nation of Palau yesterday, the site of a fearsome battle with American troops, on a rare overseas visit related to World War II.

Emperor Akihito, the son and heir of Hirohito, in whose name Japan's military fought in the decades up to 1945, was visiting the former colony officially to pay tribute to all those who perished in the war, 70 years after it ended.

"In this year to mark the milestone anniversary, we are visiting Palau as we think of a number of people who perished in the battles," Akihito, 81, said before departing from Tokyo's Haneda airport.

"We must never forget that the beautiful Pacific islands experienced such a sad history."

Akihito, accompanied by his wife Michiko, will meet Palauan President Tommy Remengesau later Wednesday, as well as the leaders of the Marshall Islands and Micronesia, also former colonies of imperial Japan.

On Thursday, they plan to visit Palau's Peleliu island, the site of a particularly bloody battle in WWII as the US swept up through the Pacific, capturing footholds from which to launch attacks on Japan.

The fight over Peleliu cost 10,000 Japanese lives and killed 1,700 Americans.

The trip comes 10 years after the emperor visited Saipan to pay respects to war dead, the only other time he has visited a former colony to do so.

Japan's media, which covers royal matters with a deep and uncritical reverence, has been excitedly reporting the visit for days.

Television footage has lingered on Japanese flags adorning the streets and interviews with locals have concentrated on how Tokyo has helped Palau with grants and infrastructure.

A significant number of people with Japanese heritage remain on the island, including at least one former president.

The apparent warmth of the people and their willingness to let WWII bygones be bygones stands in marked contrast to the fevered relations Tokyo has with South Korea and China, which also suffered under the Japanese during the war, but continue to demand penitence.

Japan has made a number of apologies for its conduct up to and during WWII, including a key 1995 statement of "deep remorse" for the "colonial rule and aggression" visited on the people of Asia.

But Beijing and Seoul continue to call for contrition, and much attention is being focused this year on an expected statement by nationalist Prime Minister Shinzo Abe for any sign of back-pedalling on earlier proclamations.