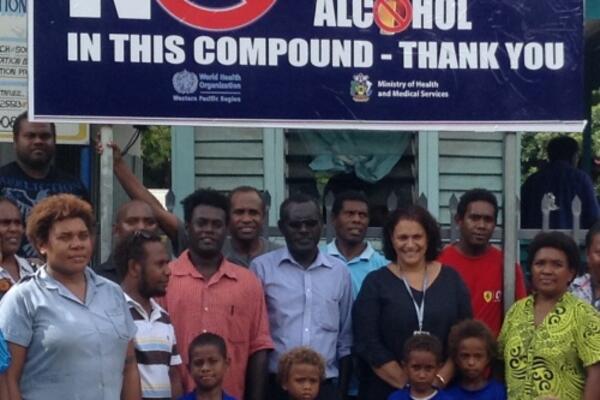 "By placing a ban on betel nut, tobacco, and alcohol, we are taking a step towards protecting our community, employees, visitors, and children from the dangers of these products", said Acting Permanent Secretary of MHMS Dr. Tenneth Dalipanda.
Source: Ministry o Health and Medical Services
Share
Friday, 31 October 2014 07:48 AM

"By placing a ban on betel nut, tobacco, and alcohol, we are taking a step towards protecting our community, employees, visitors, and children from the dangers of these products", said Acting Permanent Secretary of MHMS Dr. Tenneth Dalipanda.

“MHMS has been working to reduce the rates of noncommunicable (non-infectious) diseases in Solomon Islands by implementing these new policies. My colleagues Dr. Geoff Kenilorea and Mr. Alby Lovi, as well as Pastor Geoff Alacky, have been instrumental in achieving this.”

Tobacco, tobacco smoke, and betel nut contain chemicals that cause cancer. Betel nut is the leading cause of oral cancer in Solomon Islands and there is no safe level of exposure to tobacco smoke. Second-hand smoke accounts for one in 10 tobacco-related deaths. Second-hand smoke is the smoke that fills the air when people burn tobacco products such as cigarettes.

"Creating 100% smoke-free environments is the only way to protect people from the harmful effects of second-hand tobacco smoke", added Dr. Dalipanda.
According to the most recent Global Youth Tobacco Survey conducted in Solomon Islands in 2008:

· 79.2% of youth aged 13-15 year reported that they are around others who smoke in places outside their home;

· 45.6% think smoking should be banned from public places;

· Only 32% think smoke from others is harmful to them.

This data indicates that although many are exposed to second-hand smoke, young people do not necessarily understand the dangers.

Also, drinking alcohol, such as Kwaso, can lead to harmful health and social consequences relating to its intoxicating, toxic and dependence-producing properties.

In addition to the chronic diseases that may develop in those who drink large amounts of alcohol over a number of years, alcohol use is associated with an increased risk of acute health conditions, such as injuries including from traffic accidents.

"We need to de-normalize the use of tobacco, betel nut and alcohol", said World Health Organization (WHO) Representative Dr. Audrey Aumua.

“WHO commends MHMS for initiating this decision and addressing these issues. The impact of noncommunicable diseases goes beyond health: their socioeconomic effects are severe, often striking as people are in the prime of their working lives, reducing productivity and household income", said WHO Representative of the Solomon Islands Dr. Audrey Aumua.

MHMS and WHO will continue to work together to enforce this new policy in order to improve the health of the people of Solomon Islands.