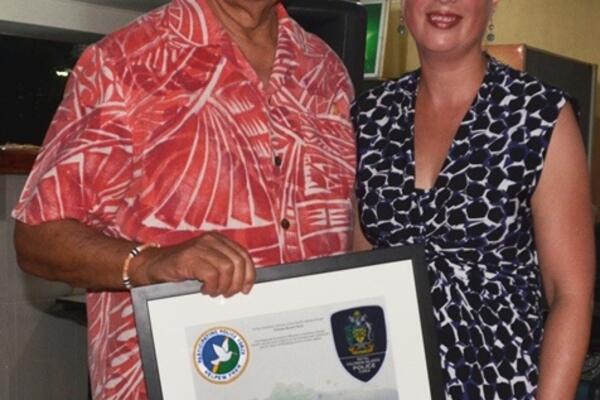 The Regional Assistance Mission to Solomon Islands (RAMSI) welcomes the 10th meeting of the Enhanced Consultative Mechanism (ECM) which concluded in Honiara today as an appropriate mechanism to monitor the performance of the Mission.

The ECM meetings are attended by senior officials representing the Pacific Islands Forum as well as the Government of Solomon Islands and RAMSI. The meetings, coordinated by the Pacific Islands Forum Secretariat, hear reports on the activities of the Mission from the both RAMSI Office of the Special Coordinator as well as the Solomon Islands Government.

“I very much welcome this mechanism endorsed by Forum Leaders which allows the Mission to report on its activities in the past year, set out its priorities for the next year, and discuss and share ideas on our future directions with officials from around the Pacific,” said Ms Justine Braithwaite, Special Coordinator of RAMSI.

“Despite being held a little bit later than normal due to the April floods, I was pleased to be able to report to today’s ECM on RAMSI’s key achievements in 2013 which included the successful completion of its transition from a comprehensive mission comprised of policing, development and military components, to its new makeup – a regional mission focused on policing and security,” Ms Braithwaite explained

Among other issues, the outcomes document of the 10th meeting of the ECM stated the following:

• The ECM noted and welcomed comprehensive reports by RAMSI and the Solomon Islands Government on RAMSI’s activities in 2013, including the significant work undertaken between January and June 2013 in preparation for the withdrawal of RAMSI’s military component, the Combined Task Force (CTF); the transfer of civilian programmes to bilateral aid programmes; and the refocusing of RAMSI’s policing component, the Participating Police Force (PPF), from frontline policing to supporting and enhancing the institutional and personnel capacities of the Royal Solomon Islands Police Force (RSIPF). ECM members further noted that the policing component, the regionally representative PPF, will remain in Solomon Islands until 2017

• The ECM was informed by RAMSI of the mission’s priorities in the post transition era, as supported by the Participating Police Force, under the agreed Drawdown Strategy 2013-2017, focusing on strengthening the capabilities and capacities of the RSIPF through leadership development and accountability; managed and consultative limited police rearmament; preventing family violence; and ensuring peaceful and well managed national elections in 2014.

• Members of the ECM agreed that the Enhanced Consultative Mechanism would reconvene in 2015, at which time it would seriously reassess the need for future meetings, including discussions within the Forum Regional Security Committee (FRSC) and whether the FRSC would be the right option for future discussions.

• The ECM expressed its appreciation to the government of Australia for its leadership of RAMSI, as well as to all Forum contributing countries and the Pacific Islands Forum Secretariat for their continued support and assistance. The ECM warmly thanked the government of Solomon Islands for the arrangements in hosting the meeting, and the excellent hospitality extended to all participating delegations.

• The ECM expressed its deep appreciation and gratitude to the outgoing Secretary General, Mr Tuiloma Neroni Slade for his significant and valued support and contribution to the work of RAMSI during his six years in office.