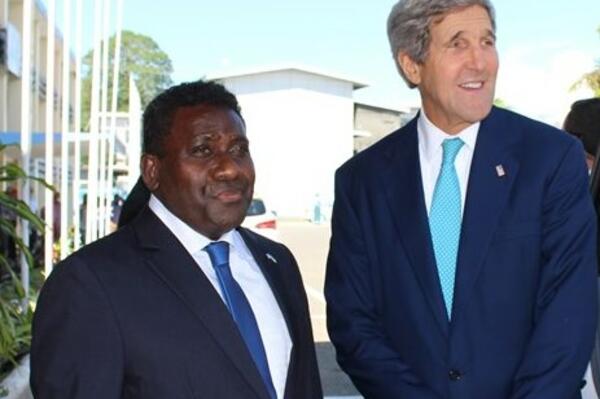 Secretary of State, John Kerry he was deeply saddened by the loss of lives during the tropical cyclone three months ago.
Source: Prime Minister's Office
Share
Thursday, 14 August 2014 07:34 AM

U.S. Secretary of State John Kerry flagged cooperation on tackling climate change during a brief stop in the Solomon Islands yesterday, where he emphasized ties dating back to World War Two.

Kerry is the first secretary of state to visit the Solomon Islands. His trip is viewed as an important part of President Barack Obama's strategic rebalance to the Asia-Pacific region, something that has irked China and been questioned by allies who wonder about the extent of U.S. commitment there.

"We have huge historical ties that we respect enormously," Kerry said in the capital, Honiara.

"There is a lot that ties us together."

Kerry said the Solomon Islands stands to benefit from U.S. funding for programs to deal with the effects of climate change in the Asia-Pacific region.

Like many island nations in the South Pacific, the Solomons faces problems from climate change and warming oceans that include rising sea levels and the acidification of coral reefs.

During his three-hour visit, Kerry laid a wreath at a memorial for Americans and allies killed during the Guadalcanal campaign of 1942 and 1943, an offensive that was considered a significant strategic victory over the Japanese.

He also visited the Solomon Scouts and Coastwatchers Memorial at Point Cruz, which honors islanders and expatriates for their service and support in World War Two. Islanders lined the streets to greet his convoy.

Kerry said during a meeting with Prime Minister Gordon Lilo he was "very saddened" by the loss of life during a tropical cyclone three months ago.

The United Nations deployed troops to the Solomons after Cyclone Ita caused widespread flooding in April, killing at least 23 people and affecting another 50,000.

The United States contributed $250,000 in assistance to help deal with the cyclone in the Solomons, which also faces frequent earthquakes.