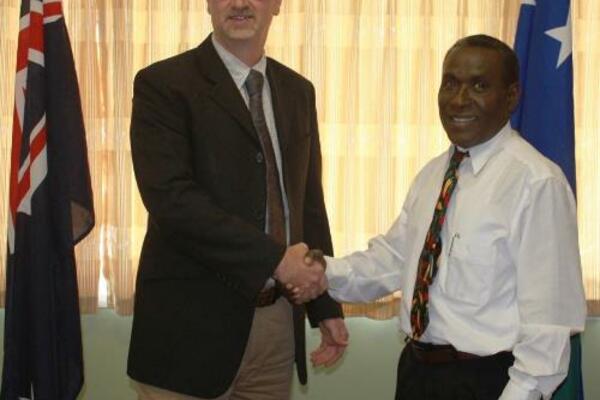 The New Zealand delegation was led by Craig Hawke, Deputy-Secretary at the Ministry of Foreign Affairs and Trade and head of the New Zealand Aid Programme.
Source: Government Communications Unit
Share
Friday, 09 May 2014 07:36 AM

New Zealand and Solomon Island Governments have held high-level consultations on the development cooperation for the two countries.

Central to discussions was progress on the New Zealand and Solomon Islands Joint Commitment for Development, which was signed in September 2011.

The New Zealand delegation was led by Craig Hawke, Deputy-Secretary at the Ministry of Foreign Affairs and Trade and head of the New Zealand Aid Programme.

“New Zealand is committed to supporting sustainable economic development in Solomon Islands,” said Mr Hawke. “This consultation has been an important opportunity to take stock, review the progress that we have made together, and ensure that the development priorities of our two countries remain well aligned. It has also been an opportunity to discuss new initiatives and potential areas of cooperation for the future – as well as reconfirm New Zealand’s support to Solomon Islands efforts to recover from the devastating 3 April flood.”

Minister of Development Planning and Aid Coordination, Hon. Connelly Sandakabatu, said “this consultation has highlighted the positive progress Solomon Islands and New Zealand have achieved under joint milestones within our Partnership. The Solomon Islands Government will continue to implement appropriate reform programmes to ensure our commitments are effected in an environment that adheres to international good practices and addresses the priorities in our National Development Strategy.”

Minister Sandakabatu added that Solomon Islands is committed to ensuring the cordial relationship between both countries continues to grow and be further strengthened through the Joint Commitment for Development. “Our Government and people sincerely convey deepest appreciation to the Government and people of New Zealand as we look forward to a long and prosperous partnership between our two countries” he said.

In addition, New Zealand’s response to the 3 April floods is more than NZD 3 million (approximately SBD 18 million) and includes two defence force relief flights, medical and defence teams and a replacement Bailey bridge for the Mataniko River crossing at Chinatown.