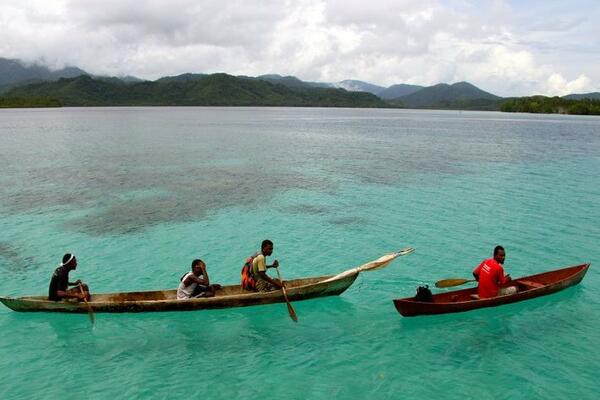 The Solomon Islands have a population of 549,600. It is an example of the kind of event that could come to “threaten the habitability of low-lying islands” in the future, according to the Intergovernmental Panel on Climate Change report.
Source: Photo supplied
Share
Thursday, 03 April 2014 08:53 AM

Efforts to prepare the Solomon Islands for the impacts of climate change have received a US$9.1 million boost from the World Bank. The money will go help set up early warning systems to alert people if an extreme weather event is about to hit, helping to save lives in the event of tsunamis or other natural hazards.

The investment will also help build community projects in climate change adaptation, such as building ‘climate proof’ buildings in four provinces across the islands.

Rick Houenipwela, the Minister of Finance for the Solomon Islands said the money would help to “kickstart” the efforts to enable communities to be “better prepared for climate change.”

Around 566,000 people live on the Solomon Islands, which is one of the Pacific’s poorest countries, and has been hit by successive global food, fuel and financial crises since achieving independence in 1978.

This week’s report from the Intergovernmental Panel on Climate Change highlighted the particular vulnerability of small islands to climate change. Among the 2,600 pages, upon which were painted a bleak picture of the future impacts of a warmer world, was a warning that the Solomon Islands have already experienced disruptions due to sea level rise. In 2008, widespread flooding displaced 63,000 people across Papua New Guinea and the Solomon islands alone.

The Solomon Islands have a population of 549,600. It is an example of the kind of event that could come to “threaten the habitability of low-lying islands” in the future, according to the report.